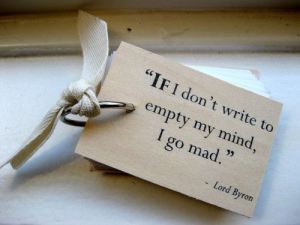 “Don't let a single day go by without writing. Even if it's garbage, if garbage is all you can write, write it. Garbage eventually becomes compost with a little treatment.”  - Anonymous


“I write for the same reason I breathe. If I didn’t, I would die.” – Isaac Asimov


“Writing is not like painting where you add. It is not what you put on the canvas that the reader sees. Writing is more like a sculpture where you remove, you eliminate in order to make the work more visible. Even those pages you remove somehow remain.” – Elie Wiesel


“Writers don’t need to be given formulas; they need to be shown possibilities.” – Barry Lane


“If you read good books, when you write, good books will come out of you.” – Natalie Goldberg


“Good writing is supposed to evoke sensation in the reader. Not the fact that it is raining, but the feeling of being rained upon.” – E.L. Doctorow


“The two most engaging powers of an author are, to make new things familiar, and familiar things new.” – Samuel Johnson


“The time to begin writing an article is when you have finished it to your satisfaction. By that time you begin to clearly and logically perceive what it is you really want to say.” – Mark Twain


“Metaphors have a way of holding the most truth in the least space.” – Orson Scott Card

Great quote to start mt morning as the birds outside are louder than one would expect. I hope I have a dong too.

I love quotes, especially ones that aim to improve your way of thinking.

I was going to say which on I liked the best, but they're all great.

I love all of these quotes! I might have to copy them all down and carry them with me :)

I love writing quotes, here is another one for you
“There is no greater agony than bearing an untold story inside you.”
― Maya Angelou

I love the one by Mark Twain. It's only after the original excitement of writing has died down that you can step back and perceive your own flaws.

Those were wonderful quotes thank you Pamela as well as the ones by those who left comments.
I have quotes written down everywhere in notebooks. I'm sure I have quotes on writing but this one is the first that comes to mind.
Talmud: we do not see things as they are; we see them as we are.

I love the quotes. I also keep a few around when I need a little push. My favorite is on my website.

Many of life's failures are people who did not realize how close they were to success when they gave up.
Thomas A. Edison

Another post on quotes and I love them all! Thanks for sharing.

I love quotes and have so many books on them too.

Some great quotes and I may have to steal...er, I mean borrow, a few of them :)

“Good writing is supposed to evoke sensation in the reader. Not the fact that it is raining, but the feeling of being rained upon.” – E.L. Doctorow

That's my favourite and exactly what I want to do as a writer. Great quote list.

“If you read good books, when you write, good books will come out of you.” – Natalie Goldberg

Where is a quote when you need one?!

I like the one by Samuel Johnson the best. Thanks for sharing them. Thanks for stopping by my blog, leaving a comment, and following me. I really appreciate it.

OH my, I would have expected OSC to say that. Sigh.

These are great quotes. I was going to say which is my favorite, but it's not easy. I think my favs are Michael Lee, Elie Wiesel & Barry Lane.....

Jules
A Dose of Jules

"A journey of a thousand miles begins with a single step." is one of my personal favorites!

Thanks for stopping by my blog. I am very interested in reading more on yours and will be adding you to my personal blog roll! :)

Great quotes. I love Maya Angelou's. Thanks for dropping by my blog.

What a great collection of quotes! I especially like the first one. I have to write quite a lot for my job, and I love it, but my true indulgence is in making up fantastic worlds for fantasy and science fiction stories and games.

I love the quotes.

Love the bird quote best. Thanks for following. Followed you back.

Y'all come back now,
Hawk aka BrownDog

And favorite is “Good writing is supposed to evoke sensation in the reader. Not the fact that it is raining, but the feeling of being rained upon.” – E.L. Doctorow

Thank you for visiting and following my blog.

~A co-contestent from A2Z Challenge.

Linda - that is another great one by Maya Angelou!

Great, inspiring quotes! I like the Doctorow and Samuel Johnson quotes the best.

I love quotes that remind me writing is an expression and art and not just a business and formula.

Awesome quotes! I feel so inspired I may have to just slack off at work and write all day!

Beautiful quotes. I will bear them in mind the next time I suffer from writer's block.

I'm pasting these on my computer screen!

Great quotes! I am following you now. I love quotes, words of wisdom :)I am returning the favor from Being Positive with a Depressive Soul. Have a great weekend!