I have not always enjoyed science fiction books. A Wrinkle in Time is the only one I can remember reading at a young age. However, several novels in the last four years have brought me back to the genre. Stephanie Meyer’s The Host was the first one I picked up in years. Enjoying this book only led to my search for others and the origins of scifi itself.


One of the biggest names in scif is Issac Asimov.
He was an American author and professor of biochemistry at Boston University, best known for his works of science fiction and for his popular science books. In his lifetime (1920 – 1992) he wrote over 500 books that enlightened, entertained, and spanned the realm of human knowledge.


Isaac Asimov was recognized by the 111th Congress on March 9, 2010 in House Resolution 1055, "supporting the designation of National Robotics Week as an annual event". The following passage appears in the text of the bill:
"Whereas the second week in April each year is designated as 'National Robotics Week', recognizing the accomplishments of Isaac Asimov, who immigrated to America, taught science, wrote science books for children and adults, first used the term robotics, developed the Three Laws of Robotics, and died in April, 1992: Now, therefore, be it resolved..." 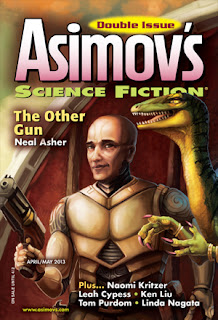 Asimov’s “Three Laws of Robotics” are defined as:
1. A robot may not injure a human being or, through inaction, allow a human being to come to harm.

2. A robot must obey orders given it by human beings except where such orders would conflict with the First Law.

3. A robot must protect its own existence as long as such protection does not conflict with the First or Second Law.

Today, Asimovs Magazine continues his love for all things Science Fiction by publishing stories in which “the characters cope with presents that are removed from our own to varying degrees, the dilemmas they face are never removed from the joys and terrors of the human condition…”


Are you a Scifi Fan? What are your favorites?
Posted by Sylvia Ney at 6:54 AM

I don't read much sci-fi. I've read Ender's Game and a couple of Heinlein's but it's not a genre I'm drawn to.

Asimov is the classic. He influenced me greatly with his Foundation series. His Robot series is one of my favorites. Nice choice!

I've read quite a bit of scifi and always enjoyed Asimov. Another favorite author is Clifford Simak.

I grew up on a diet of sci-fi. I loved Asimov (the many robot stories, and Foundation) as well as Clarke and Heinlein and many others.

Asomiv's Three Laws will probably be his defining legacy. And it's a good one!

I grew up a Star Trek geek-Okay, it's out of the closet now. I feel so much better. Good subject for day 1 Sylvia

Wow! I love Fantasy, not so much Sci-fi but there is some that I like and I didn't know abhout Asimov.

Thanks for the info!

I am a sometimes scifi fan, a lot more particular than I used to be as a child. I do love the masters, though, Asimov and Bradbury especially.

I'm a huge sci-fi fan, but never got into Asimov too much. I can't take away from his contributions to the genre, though....he was a giant in the field, for sure.

If you read Asimov, you absolutely have to read his classic short story Nightfall. It's brilliant.

Surprised by how much I enjoyed this blog post. Love the rules for robots. :) Great job, great blog!

Looking forward to reading more during my blog hopping on the A-Z tour.

I think I saw this rules but I can't remember where. Robotics is an interesting matter.

I'm not a big sci fi lover but do appreciate the growth of female protagonists in sci fi! Come visit us at http://citymusecountrymuse2012.blogspot.com/ where we are doing an original poem every day for the A-Z challenge and to celebrate National Poetry Month!

Asimov is one of my favourites and many of them I read not that long after he wrote them. I used to have all his books but had to cut back. I also loved Ray Bradbury. Today one of my favourites is Catherine Asarao, she too is a scientist who writes novels. I read a lot of spec fic these days too.

Thanks for visiting my blog.

Bear is just out of hibernation, and has taken up the A-Z Challenge again this year. I may have to stumble along for the first bit, but I expect to be there. Today: A as in Alphabet (which makes words).

Please note that I have changed blogs.

I don't really read sci-fi but I would give Asimov a chance. I'm always amazed with prolific writers and try to read their work once.

Have you read any of his works?

I do love A Wrinkle in Time!

Heard a quote from Mr. Asimov today on book radio: "If the doctor told me I had six minutes to live, I'd write faster"

A Wrinkle in Time is a terrific book. I enjoyed it immensely. I do like sci-fi books and shows. I'll have to check out Asimov. Love his robotic laws. hehe

Ok, someone has to mention Star Wars, not just the movies, but the whole novel, comics, and everything it created. Welcome to the Dark Side.
I've always found it interesting that SciFi and Fantasy are linked together. I get the whole speculative thing and that some authors cross over, but they really aren't the same.

Thanks for all the comments! I'm enjoying the challenge so far and am looking forward to some interesting posts.

Sarah - I'll check out Nightfall - thanks for the recommendation.

Juliet and Rob bear- I'm looking forward to stopping by.

Sopphey - I've read a few, but not enough.

James - I love that quote!

Bethie - I enjoy star trek movies, but I've never read any of the book series. I guess the reason people classify scifi and fantasy together is because scifi is basically your fantasy of what the future could be. Similar rules to the stories, but instead of magic you have new technology.

I went through a stage when all I would read was sci fi. That was long ago and far away. I'm afraid I hardly every read it anymore.

Stopping by from A-Z.

I think Star Trek is about my biggest foray into Scifi...and I had no clue we have a National Robotics Week! Interesting post.

My love for A Wrinkle in Time caused me to read several of Madeleine L'Engle's books. I like some Scifi, but am more drawn to the substream of fantasy.

I have never really tried Sci-fi myself. Maybe I'll start with Asimov's. :)

I must read The Host now that it has been made into a film. Was always told it was rubbish. I'll make up my own mind. The thing about Asimov is how many of his predictions have become reality.

All the best for the April challenge.

I've never read any Asimov. If I were to give him a try it would be difficult to know where to start. Any suggestions:

My recommendation would be to start with I Robot. A series of short stories involving robots.

Petedenton - I would try one of his short stories first. That way you can get a sense of him without committing to a longer work. "Nightfall" has been recommended to me as I have not read it yet. I'd love to hear what you think if you read it.

Great post. I'm going to try some Asimov now. I do like the occasional foray into SF.

I've been a Sci Fi fan since my dad snuck a Callahan's Crosstime Saloon into my hands. And that was followed by the wonderful world building of Alan Dean Foster.

I've branched out since then, but I do tend to go back to those two childhood favourites.

As a teen, I devoured sci-fi and fantasy fiction, and was a subscriber to Asimov's magazine.

Somewhere during college, I stopped, no longer able to lose myself in the tales. I started reading mystery and suspense fiction instead.

Now I split my reading between non-fiction and mystery/suspense.

But this brought back some good memories...

Love Asimov and I went on an "I, Robot" search, since I loved the movie. I think I will take up reading some more Asimov over the summer!
Thanks for stopping by :)