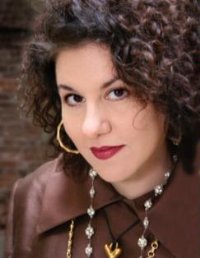 Best-selling author Adriana Trigiani is beloved by millions of readers around the world for her hilarious and heartwarming portrayal of families. Raised in a small coal-mining town in Virginia in a big Italian family, she chose her hometown for the setting and title of her debut novel, the critically acclaimed bestseller Big Stone Gap.

Now, thirteen years and fifteen books later, Trigiani has directed the movie based on that first book.


Many readers don’t realize she started as an award-winning playwright, television writer, and documentary filmmaker long before starting that first book. Those skills began her career writing for The Cosby Show, A Different World, and other popular comedies.

How has your life changed since you became a full-time writer? Well, I’ve been a full-time writer since 1989. First in television and film, and now in books, with a couple projects per year in film and television still. I started out writing plays for the theater, and I have a feeling that someday I will do something in that arena again. I’m very excited to be working on young adult novels. I love writing about the journey of women. I never know what subject will pique my interest. One of the reasons I love living in New York is that I’m exposed to great stories every day.

Are any of your other books being made into movies? I wrote the screenplay for LUCIA, LUCIA for producer Julie Durk. I would love to make Rococo into a movie.

Are you a member of any writing or critique groups, clubs/organizations? I'm in a mother-daughter book club.

What advice do you have for new authors? Be persistent. Be focused. Be yourself.

How many books have you published, and how did you make the transition to that from screenwriting?  As a playwright, I have found it very natural to write for film and television- novels, however, are wonderful because I write exactly what I want to write-and revel in it.

What lesson or tips would you share with authors trying to get published in today’s market? Write what you like- and then find like-minded people who want to get in business with you and publish your work.

To learn more: http://adrianatrigiani.com/
Posted by Sylvia Ney at 12:30 AM

It is just what I was looking for and quite thorough as well. Thanks for posting this, I saw a couple essay writing service other similar posts but yours was the best so far. The ideas are strongly pointed out and clearly emphasized.

Exciting for her especially to see her first book become a movie.
Im blogging from Fill the cracks and Moondustwriter's Blog. Happy A to Zing!

I think screenwriting would be very good discipline for novel writing. In screen writing you always have to allow for the visual. Developing that into prose is hard work but necessary work.