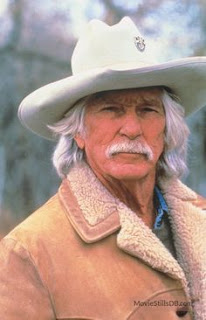 In 1998 I worked for my college newspaper, and had the opportunity to interview award-winning actor, director, and writer L.Q. Jones.

As a Beaumont, Texas college student in the 1940s, he was studying pre-law before he headed to the West Coast. There, he began a career in film and television, now spanning more than five decades.

Born Justice Ellis McQueen, he adopted the name of his character – L.Q. Jones - in his first film which “Battle Cry”.

Jones has appeared in more than 90 movies on the big screen, more than 30 television movies, and more than 40 television shows, making him one of the most widely sought-after character actors in Hollywood.

While he is probably most recognized for his roles in Casino, The Mask of Zorro, The Wild Bunch, and A Prairie Home Companion, Jones has appeared in war movies, westerns, musicals, action films, dramas, and more. He even sang with Elvis in Love Me Tender and Flaming Star.

Jones has earned three Emmy nominations and won a Hugo for Best Science Fiction Film for A Boy and His Dog, which Jones wrote, produced, and directed.


I absolutely loved talking with him – he has a strong personality that commands attention. One of the things I remember most about that interview though was how he kept calling me “Tiger”. He was extremely good-natured, willing to answer questions, and loved by many of the students attending Lamar University during his visit that year.
Posted by Sylvia Ney at 12:30 AM

What a guy! So gracious and talented. You were fortunate to have met him.

I recognize his face, that's for sure. Obviously a wonderful character actor...

Handsome man, what a great opportunity!