"I won't disappoint you. I swear every time a person walks into a movie house, they will rejoice." – Tom Hanks as Walt Disney in Saving Mr. Banks. 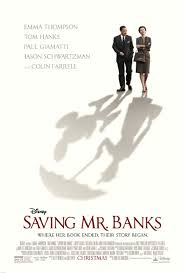 Unfortunately, I was disappointed in this movie.
Hanks, Emma Thompson (who plays author P L Travers), and Paul Giamatti (Travers driver) are some of my favorite actors. Yet, through no fault of their acting, this movie fell flat for me.

This is the first portrayal of Walt Disney in a film, and I was expecting more, well, magic and happiness. After all, he created “the happiest place on earth.”

Yet, what we see in this film is a depressing and inaccurate portrayal of Travers life. Too much of the movie was spent on flashbacks, and very little of those on the person which she may have based Mary Poppins.

Without spoiling the movie for those who still want to see it, here are a few observations about the film:

For more examples of inaccuracies: http://www.hypable.com/2014/01/10/saving-mr-banks-mary-poppins-facts/

This movie had a lot of potential, but fell short of being a success in my eyes. The movie was a biopic of Travers life (which is fine), but the movie title and trailer lead you to believe the focus is on the creation of the Mary Poppins character and movie, when in fact it is on the difficult childhood of Travers.

Have you seen or plan to see the film? What are your thoughts on it?
Posted by Sylvia Ney at 8:01 AM

I did see this film. I love Tom Hanks, and therefore anything he does. You are correct about Emma Thompson; altho a fantastic actor, she was given misdirection in the film's accuracy. A pity.

I wasn't aware of the story until I read about it when the movie came out, and I haven't seen it yet, so may wait until it comes out on DVD!

I don't think the movie was meant to be 100% accurate. It's historical fiction, not non-fiction. The whole point of the movie was Saving Mr. Banks, not Mary Poppins, Walt Disney, or even Travers. The movie was about Mr. Travers and Mr. Banks the whole time. It wouldn't have made any sense as a story if it had focused on events. Biographies will very rarely have the depth of historical fiction.

Hmm, I wanted to see this one but haven't yet. I definitely would have gone into it with happy expectations, so at least now I'll have a more realistic take on it when I do finally see it.

I've no desire to watch football tomorrow and was planning to go to a movie…guess Ill skip this one and see Wolf of Wall Street instead.

I have seen so many wildly conflicting reviews of this movie! I really, really want to see it now, any movie that can cause such strong and differing opinions among so many people is a must-see in and of itself.. :)

Please don't mistake my disappointment to be due to actors, movie quality, etc. I went into this movie expecting a happy 2 hours, and instead discovered the depressing reflection of her life. I liked the reference to Mary Poppins being there to save the father, not the children. I also liked how they showed how hard it would be for an author to relinquish control of their creations. However, as a Disney fan, I was disappointed that any movie involving a beloved icon was not more positive in its overall tone.

I agree the title is misleading. I thought there would be more about Poppins as well. But,having said that, I really enjoyed the film. I assume Hollywood always embellishes any true story, so I don't go in expecting all the facts to line up. I thought Colin (last name?), who played Travers dad did a very good job. As for Hanks, he was better in Captain Phillips. That was an excellent film.