The following is in memory of my friend Kent Conwell. He passed on February 14, 2013. This interview was the last chance I had to visit with him. He had a wonderful way of sharing his stories as well as his love of reading and writing. This mentor to countless students of the craft will be greatly missed.

Author of more than forty books, Kent Conwell grew up in the wide-open Texas Panhandle during the Dust Bowl era, and considersed himself very fortunate. Penning the popular Tony Boudreaux mystery series by Avalon Books he also published numerous westerns, wrote Young Adult novels, screenplays and a weekly newspaper column. He won awards for short stories, screenplays, mysteries, and westerns.
Born in the small town of Wheeler, he moved to Fort Worth where he earned a B.S. and began teaching. Later, he moved to Port Neches where he acquired a M.Ed. and Ph.D. He spent more than forty years teaching.


A successful educator, his first love of writing about the West, a period in history unique to America, never waned.  He kept a blog at http://kentconwell.blogspot.com/
“My blog is just a way for me to vent and perhaps preserve some memories for my kids and grandkids. The forties and fifties were exceptional periods in our history.” How did you develop an interest in writing? I've always been interested. I read constantly. In the fourth grade I wrote a three page mystery on one of those old ‘BIG CHIEF' writing tablets. Then came college and English Literature. Over the next few years, I wrote a couple of really bad novels, and then life got in the way. It wasn’t until ’71 I wrote another. The serious stuff I started in 1984. Writing is my own private world.


What else do you write? After being published in 1990, I've seen thirteen mysteries and thirty-four westerns published by Avalon and five by Leisure. Curmudgeory is my forte, and the weekly columns I write for local newspapers offer me a venue to vent my spleen.
I see you are working on a few manuscripts. What can you tell me about them? I switch back and forth between westerns and mysteries; the latter is getting hard to sell. I also write horror. I am currently working on a horror manuscript for one of my three editors.
How long did it take you to write your most recent manuscript? That is hard to say; somewhere from four to eight months. I can do a first draft of a western in four to six weeks. After that I put it aside and start a first draft of a mystery. When I finish, I go back to the western. Back and forth.


Do you do much research? Constantly; I know I’m doing a western and mystery, so I make sure to read both fiction and non-fiction in those areas.
Do you consider this a hobby or a career? I wish it were a career. Who knows? Maybe one day they’ll hit. Just recently, Harlequin World Wide Mystery bought one of my first mysteries for its subscription program. I always caution my students to “WRITE, WRITE, WRITE, BUT DON'T QUIT YOUR DAY JOB”.


What do you do when you have writer's block? No such thing. If you’re stumped, just start writing. After a page or so, you’ll slip into the current.
What is your writing routine like? I write every day, as much as I can and I like to have a rough outline to work from. Sometimes I may only get in thirty minutes, but on average two to three hours or ten pages.


Are you part of a critique group? Not currently, though I have worked in them before.
What's the most difficult part of writing for you? At first, it was the discipline—making myself plop in front of the typewriter, then computer, but after a few years of forcing myself to start each day, it becomes such a habit that I experience a surge of guilt if I don’t.


When teaching, what do you want the students who take your novel writing course to learn? There is no deep, dark secret to writing a novel. It is simply a logical sequence of steps to a conclusion. At the completion of the course, each student will have a premise, a beginning and an end. All he has to do then is fill in the middle by following Bedford-Jones’ advice, “put the hero in danger and keep him in danger.”
What can we expect from your newest release? Murder in a Casbah of Cats - Nov. 2012: 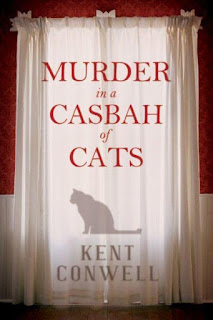 It should’ve been an easy job for a private investigator—housesit some cats for a couple weeks and rake in a few thousand bucks thanks to their eccentric owner’s bottomless bank account. Practically a vacation. At least, that’s what Tony Boudreaux figures until he finds himself trying to herd a veritable horde of cats, navigate a sprawling mansion with hidden tunnels, and deal with an eccentric staff who all harbor their own secrets. And that’s before the murder…

After witnessing a homicide on his first night on the job, Tony soon finds himself fending off attempts on his own life, unraveling a massive drug-dealing ring, and dealing with the not-entirely-unwanted attentions of a spoiled heiress—all while keeping the mansion’s many feline inhabitants alive and well.

Now Tony must dig up clues on a fifteen-year-old murder mystery and determine what it has to do with the recent death. And the cats themselves may be his only chance of getting out of this deadly predicament alive.


After using traditional publishers, what made you decide to self-publish? Three YA books for which I could not find a publisher – it’s a neat experiment. This is the only way you have control over the finished product.
How did you choose your illustrator/cover design? I did them myself.


What authors do you admire? Steinbeck, Koontz, Collins - I could name a bunch.
What music, places, people inspire you? If you have to wait for inspiration nothing will get done.


Favorite book from childhood? Hardy Boy mysteries.
What are you reading right now? Anything I can get my hands on.


Advice for other writers? It’s a lonely profession. You’ve got to be so certain of yourself that you’ll ignore the chances of failure.
Would you care to share your opening paragraph (hook) with us? THIS IS THE OPENING PARAGRAPH FROM MY WESTERN, 'SAN SABA SHOWDOWN':


Hanging’s not one of those historic events a jasper looks forward to; neither is being hounded by a posse; neither is being pursued by Comanches; neither is looking after three orphan children. Put them all together, and you’ve got an idea of just what kind of hand Fate dealt me when I rode into San Saba, Texas, three years after the War of Northern Aggression.


Conwell’s books, including his November 2012 release Murder in a Casbah of Cats can be found in bookstores and online.
Posted by Sylvia Ney at 6:30 AM

I had several thoughts while reading this interview. A feeling of sadness that such a prolific writer has died and a feeling of awe for the legacy of writing he has left, not only with his own novels, but to all the students he's taught. Thanks for sharing his books with me. I see I have a new author and books to explore.

What a lovely interview with a friend! He sounds like he would have been a great guy to know.

I was searching for Kent Conwell's newest book and came upon your posting. I'm terribly sorry to hear of his passing. I have read every single one of his Tony Boudrueax books and loved them all. I'm heartbroken that he is no longer with us. You have my deepest sympathies and please know that he was much lived and appreciated in the book universe.

I was searching for Kent Conwell's newest book and came upon your posting. I'm terribly sorry to hear of his passing. I have read every single one of his Tony Boudrueax books and loved them all. I'm heartbroken that he is no longer with us. You have my deepest sympathies and please know that he was much lived and appreciated in the book universe.