The New England winter sped by as the sun glinted through the window off a blanket of snow.  The people in the car were silent.  Sounds of mechanical chirping came from the glove box.  Neither made a move towards the noise, but each was poised, waiting for the other.  The sound stopped for a few moments, then started again.
“This is ridiculous,” Jackson said, reaching across Pamela to get his cell from where she put it in the glove box.
The car swerved as she pushed his hand away.  Jackson had to pay attention to the road.  The phone chirped again. 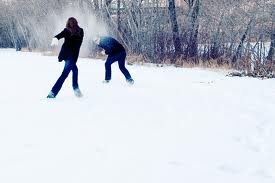 “You’ve texted more than you’ve talked to me.  It stays in there,” Pamela answered, covering the latch with her hand.
He reached for the box.  Even with one hand on the wheel they swerved and skidded.  He came to a stop on the side of the road and tried to reach again.  Pamela blocked him.
“What do you want from me, Pamela? What do you want me to say?”
Pamela didn’t answer right away. The phone sounded more insistent.  “I want a snowball fight!” Shejumped out of the car, slamming the door behind her.
“Are you crazy?”  Jackson got out.  Before he could say anything else he was pelted with snow.
Pamela had picked up more snow and was packing it together. He ran to her and grabbed her stopping her from launching another attack.  With his arms encircling her waist he twisted her around and they both fell back into a snow bank, Pamela landing on his lap.  They were both laughing like idiots.
Pamela tried to get away from him.  He held fast with one arm and with the other hand grabbed some snow to rub in her face.  He brought his hand up, but she realized what he was going to do and stopped him, grabbing his wrist with both of her hands.
He rolled her into the snow, facing her.  She was so beautiful, her dark hair dusted with snow.  Work had been so hectic he hadn’t taken the time to remember how much she took his breath away. He wanted to fix that now and leaned in to kiss her.  She put her arms around him as their lips met.
“I love you,” he whispered.
“That’s what I wanted you to say.”
She kissed him again.  They got back in the car and continued on to the bed and breakfast. Pamela watched the snow pass by.  She traced a heart in the fog her breath left on the window. In her fog heart she put JTY’s PT. Jackson reached over and took her hand, enclosing it in his. The mechanical chirping became nothing more than background noise.
About the Author:  Beth is the author of many short stories, poems, and partial novels. To date she hasn’t had anything officially published but her work is out there for consideration. Beth’s a big fan of snowball fights. You can find her at http://www.creatingwordlenik.blogspot.com/
Posted by Sylvia Ney at 7:48 AM

Note apropos of probably nothing. Snowball fight is the Canadian version of food fight.

This makes me happy ... we have not had a true winter here, and I miss the snow. What a sweet story.

Oh, Beth, what fun! Made me want to have a romantic snowball fight!

So much emotion from one short experience

Thanks to everyone for wonderful comments. To Rob-bear: I don't know much about Canadain snowball fights. In Lousisana it's usually mud.

Such a lovely story, thank you for sharing. I'm glad the cell phone became background noise!