I have received my twelfth and, for now at least, final box from Scribbler. You can learn about previous boxes, and why I subscribed by clicking the "Scribbler" link in the labels below.

I was pleasantly surprised  to find the box this month featured a DOUBLE theme: OPENINGS and HUMOR.

As always, the first thing you see upon opening the box is a writing exercise/contest postcard. Each month provides a new challenge for writers to practice. The deadline for this month is 4/15.

The "Curated Writerly Gifts" this month include a bookmark featuring one of the authors other books, a "Creating a Character" guide page, a lemon and coffee scented candle, and old-fashioned "Green Apple" hard candies that were quite good.

As usual, this box also came with an inside look at the publishing process for ONE of this months author's, and an exclusive invitation to chat with a publishing professional: Jane Dystel, agent and president of Dystel, Goderich, & Bourret LLC,  as well as the collectible 'Writing Passport' with each of the author's discussing one of this months themes - Darynda Jones on OPENINGS and David Sosnowski on HUMOR.

This months box included a copy of FIRST GRAVE ON THE RIGHT by Darynda Jones and the new release novel BUZZ KILL by David Sosnowski. I've never read a book by either author, and I'm looking forward to both of these as the descriptions are very interesting: 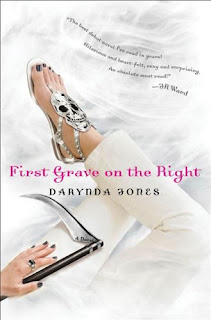 First Grave on the Right (the first in a 13 book series) is the smashing, award-winning debut novel that introduces Charley Davidson: part-time private investigator and full-time Grim Reaper.
Charley sees dead people. That's right, she sees dead people. And it's her job to convince them to "go into the light." But when these very dead people have died under less than ideal circumstances (i.e., murder), sometimes they want Charley to bring the bad guys to justice. Complicating matters are the intensely hot dreams she's been having about an Entity who has been following her all her life...and it turns out he might not be dead after all. In fact, he might be something else entirely.
This is a thrilling debut novel from Darynda Jones, an exciting newcomer to the world of paranormal romantic suspense.
First Grave on the Right is the winner of the 2012 Rita Award for Best First Book. 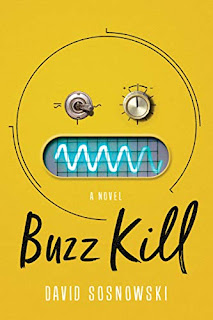 “Along with the almost satirical rendering of the world, the lovely writing, and engaging plot, the characters of George and Pandora are brilliant.” —Booklist
Pandora Lynch lives in Alaska with her single dad, an online therapist for Silicon Valley’s brightest and squirreliest. Homeschooled by computer and a self-taught hacker, Pandora is about to enter high school to learn how to be normal. That’s the plan at least.
NorCal runaway George Jedson is a hacker too—one who leaves the systems he attacks working better than before. After being scooped up by a social media giant, will George go legit—or pull off the biggest hack ever? Not even his therapist knows for sure, but maybe the headshrinker’s daughter…
After meeting in cyberspace, the two young hackers combine their passions to conceive a brainchild named BUZZ. Can this baby AI learn to behave, or will it be like its parents and think outside the box?
With a hilarious and deeply empathetic narrative voice, this elegiac and unapologetically irreverent novel is both humorous and tragic without ever taking itself too seriously.


Scribbler made a few changes for April. So, if you're curious about this box, here is a cheaper chance to try it out - if you don't mind digital:

Due to the That Which Shall Not Be Named, we are offering an entirely digital Scribbler box for the first time ever! Hooray! 🎉 Each virtual box will include a digital Writing Passport with an introduction from Scribbler and an exclusive essay from a bestselling author on pulling readers' HEARTSTRINGS. This box will also include a digital Publishing Process Inside Look, an invitation to an online live chat with one of the most powerful literary agents in the industry, and a fun Writing Contest that's exclusive to the box. Our April Scribbler Box will hit your inbox on April 21 along with a buy link to an ebook that complements the included teaching materials. We'll be running book discussions with the Scribbler founders, so while the book isn't required to enjoy the box, it sure will sweeten the experience (and keep a hungry author fed!). See you April 21st for a month of learning and online fun!


The company hopes to return to shipping their regular style boxes in May. To learn more about this monthly box service: https://www.goscribbler.com/


Do you subscribe to any boxing services? Have you heard of SCRIBBLER? Are you tempted to join?

A virtual box? That's a good idea for some people. Although the virus can't survive on cardboard past a day.
A chat with Jane Dystel? Now that's big!