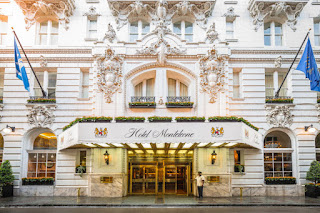 I’ve enjoyed several trips to New Orleans, but my most recent trek over Memorial Day weekend focused on literary locations I thought I would recommend. You can, of course, pay to take a guided walking tour, but I just chose to do a bit of research beforehand and walked along exploring myself. 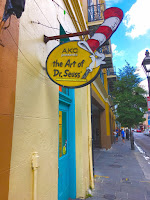 Hotel Monteleone – 214 Royal St. http://hotelmonteleone.com/ – Popular among the New Orleans literati, this hotel lobby is filled with several window displays of books written by authors who stayed, dined, or drank while writing here. Among the alumni are Hemingway, Faulkner, Tennessee Williams, Eudora Welty, Anne Rice, and John Grisham. I suggest you peruse the beautiful displays and then take a spin on the slow-spinning Carousel bar.

Art of Dr. Seuss – 716 Bienville - one of our first stops was quite by happy accident. As we left our hotel, headed toward Jackson Square, we came across this delightful gallery. I highly recommend a stop for any Seuss fan.

Preservation Hall – 726 St. Peter St. - New Orleans is the birthplace of Jazz. If you’ve ever read Tom Sancton’s Song For My Fathers then you might want to stop by the Preservation Hall jazz club where Sancton learned about the masters of this music which in turn spurred his memoir of a white male’s obsession with jazz in a pre civil rights era.

Faulkner House – 624 Pirates Alley, next to Saint Louis Cathedral – this former home of William Faulkner, Nobel and Pulitzer prize-winning author is now a bookstore. He lived and wrote here in the 1920’s during the height of French Bohemia. The current owners have lovingly restored this building and turned it into one of the premier independent bookstores in the country. 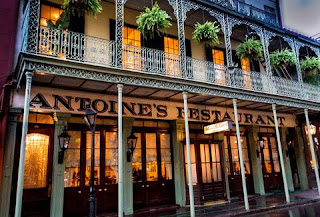 Antoine’s Restaurant – 713 St. Louis St.  http://www.antoines.com/ - Author Frances Parkinson Keyes wrote prolifically about Louisiana, but found her biggest success with the murder mystery Dinner at Antoine’s. This beautiful restaurant has been serving patrons since 1840. If you’re not up for the full, and somewhat pricey, meal there bakery can also be visited. We enjoyed a delicious and refreshing break at:

Tenneessee Williams Homes – After a brief stay at 429 Royal St, the writer is said to have stayed in an attic apartment at 722 Toulouse St, in later years at 632 St. Peter St, before finally settling in a townhouse at 1014 Dumaine St. These locations can all be seen today. 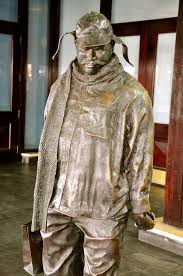 Ignatius Reilly Statue – 819 Canal St. at the entrance to the former D.H. Holmes Department Store (where the book begins) - Ignatius J. Reilly is the main protagonist in John Kennedy Toole’s comedic masterwork A Confederacy of Dunces. In the novel Reilly bumbles around a slightly fictional New Orleans, running into a menagerie of local color. With the strong narrative ties to the city, it is no wonder that the Pulitzer-Prize-winning novel would be honored on its streets. If you look and find him missing, don’t worry, he is sometimes moved indoors for Carnival, or other highly tourist packed times. http://www.thedepartmentstoremuseum.org/2010/05/d-h-holmes-co-ltd.html

Bourbon Orleans Hotel – 717 Orleans St. – Quadroon balls are believed to have been held here in the early 19th century. In a system known as “placage,” wealthy Frenchmen were introduced to potential mistresses who were one-quarter African-American (Quadroons). Arrangements for financial support, education, and housing were reached here, and these socially accepted relationships often lasted for the lifetime. Accounts of this appear in many books, including Anne Rice’s Feast of All Saint, Isabel Allende’s Island Beneath the Sea, and Old Creole Days by George Washington Cable.

Anne Rice – if you’re a fan of Anne Rice or her Witch or vampire books, then you might consider taking the Anne Rice tour. http://annericetours.com/

Café Du Monde – 800 Decatur St. – Since 1862 many tourists and writers alike have enjoyed coffee and beignets at this famous café that is open 24 hours a day, seven days a week.

Café Beignet – 334 Royal St. – while the above is probably more famous, it stays busy and loud. Some writers prefer this cafe which offers a larger menu selection, and smaller crowds.

Jean Lafitte Museum – 419 Decatur St. – one pirate who has inspired many stories is the notorious Jean Lafitte. While there are several national parks and museums dedicated to this privateer, one such locations resides in the French Quarter. https://www.nps.gov/jela/french-quarter-site.htm 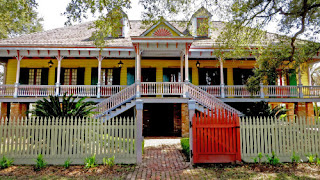 Laura Plantation - This last location isn’t technically a part of New Orleans, but it’s not far from the city. Inside one of the slave cabins here, built in 1840, is where the ancient west-African tales of Compair Lapin, better known in English as "Br'er Rabbit," were recorded.  This is also one of the few remaining plantations that is not painted in the traditional “white” we think of, but is instead painted in vibrant hues often used by true Creole families.

Ever been to any of these? What are some of your favorite haunts in New Orleans?
Posted by Sylvia Ney at 9:08 AM

That's a lot of hot spots. I've always wanted to go to New Orleans. Now I've added to my list of places to visit.

I've always wanted to go to New Orleans - this is a great post!

Wow! What a great post! You did a lot of research. Did you get any inspiration while in New Orleans?

Em - I certainly did. It's such a beautiful, historic, and diverse town - I defy anyone to visit any not be inspired by some aspect.