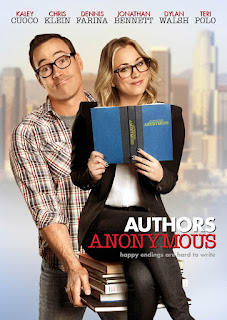 I first heard of this movie about a year ago, but had completely forgotten its existence until I saw it in a clearance bin recently. The description reads:

After a dysfunctional group of unpublished writers with the motto "all for one" accept Hannah Rinaldi (Kaley Cuoco-Sweeting) into their fold, the last thing they expect is her overnight success - but that's exactly what they get. While her career takes off, her eccentric and envious colleagues (Chris Klein, Teri Polo, Dylan Walsh, Dennis Farina and Jonathan Bennett) struggle to find their own paths to publishing fame and fortune. Tensions rise, rivalries form, and hearts are broken. Rejection turns to desperation. Good thing they're only armed with pens...

I scooped it up, and eagerly returned to my couch to enjoy this little known comedy. While it is mildly enjoyable and I can definitely see some familiar author traits and experiences in these characters, the movie was far from what I was hoping for in a montage to the craft.

The show begins with someone (an unknown and never revealed crew) following these characters to make a documentary about critique groups. The camera captures the best and worst in the differing personalities of these writers.

Since it is enjoyable enough to watch when you have absolutely nothing else going on in your life, I might generously give it three out of five stars.

If you're curious, here is the trailer:

Have you seen this film? What did you think of it?
Posted by Sylvia Ney at 8:42 AM

Well, the trailer was cute...

The trailer makes it look fun. I'm sad to hear it didn't quite live up to expectations.