This Year You Write Your Novel 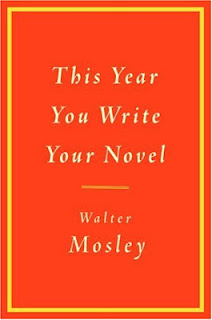 I just finished reading This Year You Write Your Novel by Walter Mosley. This book is short (less than 25,000 words). While it is going to be more beneficial to a beginner, there are some nuggets of gold and inspiration for veterans.

“The process of writing a novel is like taking a journey by boat. You have to continually set yourself on course. If you get distracted or allow yourself to drift, you will never make it to the destination. It's not like highly defined train tracks or a highway; this is a path that you are creating discovering. The journey is your narrative. Keep to it and there will be a tale told.”

Walter Mosley is one of the most versatile and admired writers in America today. He is the author of more than 37 critically acclaimed books, including the major bestselling mystery series featuring Easy Rawlins. His work has been translated into 23 languages and includes literary fiction, science fiction, political monographs, and a young adult novel. His short fiction has been widely published, and his nonfiction has appeared in The New York Times Magazine and The Nation, among other publications. He is the winner of numerous awards, including an O. Henry Award, a Grammy and PEN America’s Lifetime Achievement Award. He lives in New York City.
Posted by Sylvia Ney at 8:08 AM

I've discovered that writing books can allow detours, to the contrary. It's more like wandering through a house and opening all the doors.

I'm planning to do NaNoWriMo, so the part about not allowing yourself to drift is something I'd need to remember come November.