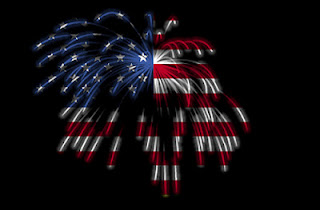 In honor of America's celebration of Indepedence, try a writing exercise using some or all of the words on this patriotic list!

I'm a few days late for Canada Day (July 1st), but I'd like to try the challenge. Lots of those words would work for Canada's history, too.

Thanks for the suggestion.

These all are good prompts, but you left out a biggie - revolution! lol

Yeah, thanks for this.

Hope you had a fantastic Independence Day. It was a HOT one here in St. Louis. It was 107. Cray-zee hot.

I was proud of our community, not one pop or bang as they were prohibited because of our fires, but I was sure I would hear something--nothing. Now the rains have come, a little late. But a Happy 4th, (a little late).