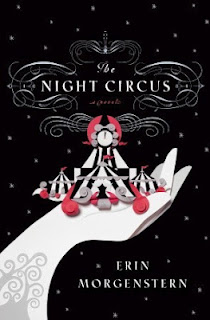 The circus arrives without warning. No announcements precede it. It is simply there, when yesterday it was not. Within the black-and-white striped canvas tents is an utterly unique experience full of breathtaking amazements. It is called Le Cirque des Rêves, and it is only open at night. But behind the scenes, a fierce competition is underway—a duel between two young magicians, Celia and Marco, who have been trained since childhood expressly for this purpose by their mercurial instructors. Unbeknownst to them, this is a game in which only one can be left standing, and the circus is but the stage for a remarkable battle of imagination and will. Despite themselves, however, Celia and Marco tumble headfirst into love—a deep, magical love that makes the lights flicker and the room grow warm whenever they so much as brush hands. True love or not, the game must play out, and the fates of everyone involved, from the cast of extraordinary circus per­formers to the patrons, hang in the balance, suspended as precariously as the daring acrobats overhead.

I came across this book in Target last week, attracted by the cover design and title, the description made me curious.
Erin Morgenstern has succeeded in providing readers with a beautiful tale that is both as magical and enchanting as her circus. I enjoyed this book. This historical story proved intriguing, captivating, and the descriptions of the circus itself are amazingly beautiful.
However, the main characters don’t even have much interaction for nearly 300 pages. Their interaction consists of manipulations of the circus itself, not each other. While this is appropriate to the purpose of the story, I would have loved to see more interaction directly between Celia and Marco, especially toward the end of the tale.
Morgenstern did a wonderful job of jumping around in time and keeping my interest. The characters were believable and engaging, and the setting beyond compare. Motives and sequence remained clear for me, but something was still missing. I expected a bigger bang at the end and I felt let down.
I’m still glad I read this book and I would recommend it to anyone.
Have any of you read it? What did you think?
Posted by Sylvia Ney at 8:01 AM

You first sentence, Sylvia, made me think of Ray Bradbury's 1962 novel, Something Wicked This Way Comes. No connection, of course, but already I'm feeling edgy. (Meaning I probably won't read Erin's book — I cannot take too much dramatic tension.)

I'm sure there will be folks who enjoy it. Thanks for posting this review.

I've read this book, it makes an interesting read. I do agree- there should've been much more interaction between Celia and Marco. They were made to seem like unknown competitors for much too long.

This book is on my to-be-read list. Sounds interesting. :)