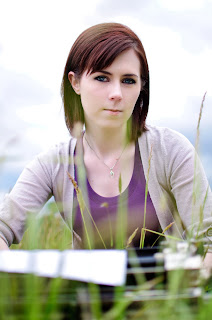 Congratulations to Jenni Merritt for winning the “1000 Words” writing contest.  She is an aspiring author, currently editing her first manuscript. When not writing, she is a busy stay at home mom of two little boys.  Jenni says they keep her on her toes at all hours. If you would like to know more, you can visit her blog at http://jennimerritt.blogspot.com/
I received so many wonderful stories. In the end I chose her heart wrenching submission over the others because I felt she did a wonderful job maintaining the focus of the story based on the supplied photograph.  I hope you enjoy her tale as much as I did.
Lost Warmth
by Jenni Merritt
She held her head in her shaking hands. Her hair hung in water soaked tendrils around her flushed face, dripping over her slumped shoulders and down her back. Taking a shuddering breath, she ran her fingers through her limp hair. They caught in a knot and she numbly let them drop to the ground. Carefully, barely audible under her gasping breath, she began counting the dying raindrops.
“One. Two.” It was silent a moment. Then she heard the drip of water hitting the ground once again. Her eyes were glued to the shining pavement, barely even blinking. “Three.” With each careful count, her tears finally slowed.
It must have been hours since she first collapsed in the abandoned parking lot. Everything was dark now, the only light glowing from a lone lamp. Its beams bounced off the thin layer of water that covered the ground, casting the world around her into a soft glow. It would have been beautiful, if not hinted with the growing darkness in every corner.
Her body ached from the hours of sitting there in the rain, barely moving. A shiver ran down her back. Even though her body shook with cold, she barely felt it. She was drenched, her clothing hanging heavily on her shuddering frame. Knees tucked to chest, bare feet curled in the cold, she let her head hang again between her hands. “Four.” She breathed, another drop barely splashing on the ground next to her.
It was silent.
For one split second in time, there was no noise. She held her breath, taking in the complete lack of rain and crying and useless begging.
Then the footstep splashed in the glowing water.

Her head jerked up. There, standing under the lamp in the hazy glow, was a silhouette. The world disappeared around his frozen body, fading into an impenetrable black. She sucked in a breath, waiting for him take another step forward. As if hearing her silent request, the man moved forward. The glow of the lamp hit his face. All of the air, all of the trembling and tears, froze. She couldn’t even blink. She knew that face. He hadn’t changed. It was still him, still the slight smirk on the lips, glitter in the blue eyes, scar across the right cheek. She knew every inch of that face. Yet, at the same time, she didn’t know it all. There was a strange new angle cut into every once familiar dip. He was more striking, more perfect. His face seemed to glow from within, battling the dim light of the lamp and reflection of the dead rain.
“Is it really you?” The whisper escaped her lips before she could catch it.
The man held his hand out. Tender, he had always been tender. “Of course it is.”
Her heart pounded at the sound of his smooth voice. She hadn’t realized how much her ears had missed it until it kissed them again just now. “It can’t be you. You left me. You’re… you left me.”
He shook his head. “Please…”
“No.” She said firmly. With shaking arms, she pushed herself back to her feet. They throbbed from the barefoot sprint that had brought her to this dark, lonesome place. She had wanted to get away. She needed to get away. Instead, somehow, her feet had led her here. To him. “No, you are gone. You left me without even a goodbye. You just left. And I...”
His shoulders heaved, as if a sudden sob had racked his entire being. She ached for him. She ached for his touch, for his whisper in her ear, for every inch of who he was. But she couldn’t take a step closer. All she could do was glare and heave another angry sob, her world crashing even harder around her as she stared at his perfect silhouette.
“Please,” he said again, taking another step closer to her. “I never left. I have always been here. I just… things have been complicated. I needed to protect you.”
“Protect me?” She took a step forward against her own will, her anger simmering in her need for his very scent. “Protect me from what?”
He was only a few inches from her now. She could feel his breath on her skin. A hand rose and softly stroked her arm. Familiar tingles ran through her body, her flesh remembering this touch. Leaning against his hand, she felt the roughness of his palm caress her cheek. He still smelled of rain and oranges. She breathed him in, letting his fingers trace her trail of tears.
“I needed to protect you. From me.”
Tears stung her eyes and she threw herself into his arms. She couldn’t hate him. She couldn’t hold any of this horrible fate against him. She couldn’t. “I don’t need protection. I need you.” She buried her face into him, his arms wrapping tighter around her rain drenched body. “I missed you so much.” Her words were a muffled sob into his chest.
With a finger, he lifted her chin. He gazed into her eyes a moment, shadows passing his face before he leaned in. His lips pressed against hers. The world exploded around them, the darkness gone, the glow gone, everything gone but the kiss that drew them tighter into one another’s shaking arms. Everything was white and warm and throbbing as she kissed him back. Then it ended. Her lips cold, eyes closed, she breathed in his rainy scent.
“I was never gone.” He whispered. She could taste his words. “I will never leave.” He kissed her cheek lightly, a touch of warmth in the cold world. “I am always here.” She felt him take a step back, his touch now gone from her shivering arms. “I promise.”
Silence.
Her eyes crept open. Through her tangled eyelashes, all she could see was the glow of the pavement in the dead rain.
“One…”
Posted by Sylvia Ney at 8:08 PM

Awww! Sad, heart wrenching. Love the counting of the raindrops.

Oh goodness. That was so sad and lovely!

Well timed and thoroughly engaging. It left me with questions, which I love.

Thank you Sylvia! It is such a thrill to see my writing somewhere else than hidden on my computer. This was a great contest, and you sure made my day by choosing this piece. :)

Thank you for hosting the contest Sylvia and for choosing such a worthy winner. I love Jenni's style of writing.

Lovely piece! I agree with Susan--lots of unanswered questions that work well for a short story like this. So emotive. I felt the cold and dampness, the loneliness and longing. Well done Jenni!

I loved this! Great choice Sylvia.