I realize I haven't spent much time blogging about screenplay writing. I taught it for five years, so maybe I needed a break, or maybe I just assumed my readers might not be interested in that topic. Most of the writer's I have interacted with lately are working on a novel, children's book or poetry.

I write for a variety of genres and want to encourage you to try new ones as well. Too many authors feel they must lock into one style and this just isn't so.
"But I write horror novels, what do I know about writing for children?" Well, who better to write a story about the abuse of a child? Monsters real and imagined share common traits.
"Well, I write Sci-fi and kids just can't relate." Do you realize how many children dream about going into space, traveling to new worlds, and meeting new species? 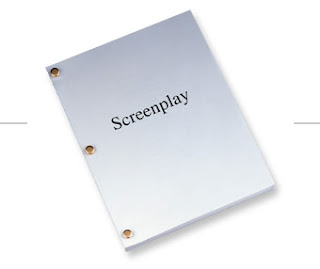 "I write books. I could never write a screenplay or radio theater." Why not? The same concepts apply, the formatting is just different. If you've ever thought about writing a screenplay or radio theater, but don't know how, try a general search in your favorite book store. I used Joseph Campbell and Christopher Vogler books when I was teaching. You can find an abridged version: http://www.thewritersjourney.com/hero's_journey.htm  or use your favorite search engine. Try: http://www.screenwriting.info/

For anyone brave enough to submit a screenplay or radio theater, here are two opportunities:

BABES WITH BLADES SWORD AND PEN CONTEST http://www.babeswithblades.org/competition.htm - There is no entry ree. The feminist theatre company that celebrates women in fighting roles is seeking scripts for production in Spring, 2012. Winner receives $1,000. Seeking full-length (75-120 minutes) scripts that include a depiction of the image "Erinyes" by artist Victoria Szilagyi. Both all-female and mixed-gender casts will be considered, but women must be in most/all primary roles and most/all of the combat scenes. Electronic submissions strongly preferred, but postal mail submissions will be considered. Deadline: February 28, 2011.
INTERNATIONAL RADIO PLAYWRITING COMPETITION http://www.bbc.co.uk/worldservice/arts/2010/10/100728_playcomp_what_its_about.shtml - There is no entry fee. This is a competition for anyone resident outside Britain, to write a 60-minute radio drama for up to six characters. There are two categories: one for writers with English as their first language and one for writers with English as their second language. The two winners will come to London and see their play made into a full radio production, which will then be broadcast on the BBC World Service. They will also each receive a £2,500 prize and there are also prizes for the runners-up. The play must be in English, unpublished and must not have been previously produced in any medium. Whether you're experienced, new, or somewhere in between, we want to hear from you. All scripts submitted must be a minimum of 50 pages. Deadline March 31, 2011.
Good luck and Happy Writing!
Posted by Sylvia Ney at 12:43 PM

You know Sylvia, that is one genre I actually never had an interest in writing. Perhaps I just felt I neer could so I didn't invest in the idea....

Sylvester Stallone wrote and sold the first 'Rocky' screenplay. The rest is history.

Actually, what I think would be fun would be to be one of the screenplay writers for a novel already popular. Don't know why this appeals.

Have a great weekend, Sylvia.

I'm taking Scriptwriting in film college, and a lot of the same principles apply in novel-writing. There are only a few differences, like how this kind of writing has a deeper focus on descriptive writing, and every detail, or at least as many as possible, need to be included. In class, we talk a lot about how symbolic imagery reinforces the scene when it's written in the screenplay. There's also that bit about the hollywood structure, and breaking out of those narrative conventions. We analyzed a few scripts like the first 10 minutes of Inception and Black Swan. Really brilliant introductory methods. Later we're studying Tarentino's loop-script, which he's most famous for. The whole process is really fascinating :D Really tough, though.
Oh another note, novel writers who have experience in screenplays get the advantage of possibly writing the script if their book's turned into a movie. So I'd think nowadays, more writers would want to try it out.

Great post and have an awesome weekend! :D
xoxoxo

I actually started out my writing endeavors with screenplays. I have written four of them (two with other women), two by myself. I find screenwriting has made me a more concise writer. I totally agree that writers should try all sorts of genres and forms.
Thanks for the post. I enjoyed it!