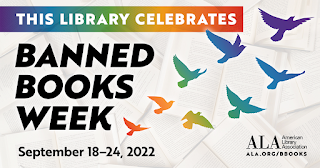 September 18 is the beginning of "BANNED BOOKS WEEK 2022". Below is a couple of lists of ten of the most frequently challenged books.
A challenge is an attempt to remove or restrict materials, based upon the objections of a person or group. A banning is the removal of those materials from the curriculum or library, thereby restricting the access of others.
The Top Ten Most Frequently Challenged books list is compiled by the Office for Intellectual Freedom (OIF) and is based on or derived from communities across the United States. According to their data here, the ten most challenged books of 2021 were:

1.  Gender Queer by Maia Kobabe
Reasons: Banned, challenged, and restricted for LGBTQIA+ content, and because it was considered to have sexually explicit images

2. Lawn Boy by Jonathan Evison
Reasons: Banned and challenged for LGBTQIA+ content and because it was considered to be sexually explicit

3. All Boys Aren’t Blue by George M. Johnson
Reasons: Banned and challenged for LGBTQIA+ content, profanity, and because it was considered to be sexually explicit

4. Out of Darkness by Ashley Hope Perez
Reasons: Banned, challenged, and restricted for depictions of abuse and because it was considered to be sexually explicit

5. The Hate U Give by Angie Thomas
Reasons: Banned and challenged for profanity, violence, and because it was thought to promote an anti-police message and indoctrination of a social agenda

6. The Absolutely True Diary of a Part-Time Indian by Sherman Alexie
Reasons: Banned and challenged for profanity, sexual references and use of a derogatory term

7. Me and Earl and the Dying Girl by Jesse Andrews
Reasons: Banned and challenged because it was considered sexually explicit and degrading to women

8. The Bluest Eye by Toni Morrison
Reasons: Banned and challenged because it depicts child sexual abuse and was considered sexually explicit

9. This Book is Gay by Juno Dawson
Reasons: Banned, challenged, relocated, and restricted for providing sexual education and LGBTQIA+ content.

10. Beyond Magenta by Susan Kuklin
Reasons: Banned and challenged for LGBTQIA+ content and because it was considered to be sexually explicit.

You can also view previous lists as well at OIF. The list of the most banned books for 2022 will be available in April of 2023. However, if you're curious about the most frequently banned books in their records in America:
TEN OF THE MOST FREQUENTLY CHALLENGED BOOKS IN AMERICAN HISTORY:

Some books have been repeatedly banned or challenged throughout history. This is a list of books that appear the most often on THE UNITED STATES banned books lists.


If you would like more information about banned and challenged books, contact the Office for Intellectual Freedom at (800) 545-2433, ext. 4220, or oif@ala.org. Another god source of information on banned books is the "Libraries and Center for Academic Technology" site by Butler University: https://libguides.butler.edu/c.php?g=34189&p=217684
Posted by Sylvia Ney at 12:30 AM