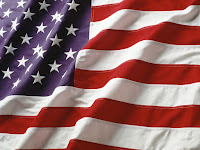 On September 14, 1814, Francis Scott Key penned a poem which was later set to music and in 1931 became America's national anthem, "The Star Spangled Banner." The poem originally titled, "The Defence of Fort M'Henry," was written after Key witnessed the Maryland fort being bombarded by the British during the war of 1812. The sight of those "broad stripes and bright stars" inspired thousands. If you've never heard the story before, try the video below.

Have you ever heard this story before? Do you know the words to this poem/song? Can you think of any other piece of writing that has influenced thousands?
Posted by Sylvia Ney at 12:30 AM

I've heard the story. I bet he never thought it would become our anthem.