These Are A Few of My Favorite Weird Things

I thought I would join in the fun and play the following game. It’s called These Are A Few of My Favorite Weird Things. (For other samples see here.)

Mine is Lilies of the Field. I'm often surprised how few people have seen this. None of my friends claim to have even heard of it. It's a 1963 film adapted by James Poe from the 1962 novel of the same name by William Edmund Barrett, and stars Sidney Poitier, Lilia Skala, Stanley Adams, and Dan Frazer. The title comes from Matthew 6:27-33, a portion of the Sermon on the Mount, and its parallel scripture from Luke 12:27-30. The movie tells the story of an African American itinerant worker who encounters a group of East German nuns, who believe he has been sent to them by God to build them a new chapel. Poitier won the 1963 Academy Award for Best Actor, the first African-American to win a Best Actor award and the second African-American to win any Oscar (the first was Hattie McDaniel who won an Academy Award for Best Supporting Actress for Gone with the Wind). Poitier also won the Silver Bear for Best Actor at the 13th Berlin International Film Festival. The film was also nominated for Best Actress in a Supporting Role (Lilia Skala), Best Cinematography, Black-and-White, Best Picture and Best Writing, Screenplay Based on Material from Another Medium. The film was also nominated in 1965 for the United Nations Award at the BAFTA Awards.

2. Favorite Book Nobody Else Has Read 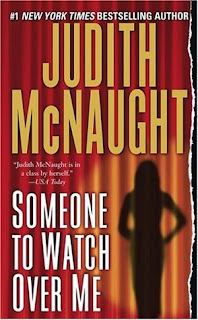 Mine is Someone to Watch Over Me by Judith McNaught. She has been a popular author and the Amazon page for this book shows more than 200 reviews in favor of the publication. However, none of my friends seem to have read it. In this book, Leigh Kendall is relishing her stellar Broadway acting career in her marriage to Logan Manning, scion of an old New York family, when her husband finds the perfect mountain property for their dream house. But while driving upstate on a winter’s night, Leigh is run off the road in the midst of a blinding blizzard. When she awakes in the local hospital, seriously injured, the police inform her that her husband has mysteriously disappeared, and Leigh becomes the focus of their suspicions. The more she discovers about her husband and his business affairs, the less she realizes she knew about Logan Manning. Now, Leigh is heading deeper and deeper into unknown territory—where friends and enemies are impossible to distinguish, and the truth becomes the most terrifying weapon of all in this thrilling tale filled with unrelenting suspense, unforgettable characters, and powerful traces of greed, ambition, and desire. 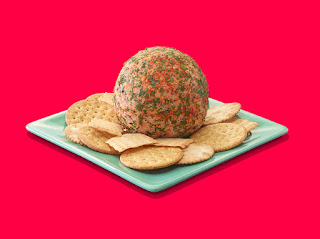 SPAM Cheeseball. A friend turned me onto this years ago, but most people completely cringe away from even trying it since it includes SPAM. I only use half a can of smoked SPAM with mine, but a friend uses the whole thing and then adds pineapple and rolls it in parsley or pecans. Here is the recipe I use: Mix 2 - eight oz cream cheese, 1/2 can of smoked SPAM, 3 chopped green onions, 1 and 1/2 tsp. Worcestershire sauce, 1 tsp. salt, 1/2 tsp. onion salt, 1/4 tsp. garlic powder, 1/2 tsp. soy sauce, and 1/2 tsp. red pepper. Roll into a ball and chill to desired consistency. Serve with favorite crackers.

4. Favorite Thing To Do When No One Is Looking

Lay around in my pajamas.

I know I'll catch a lot of crap over this one, but I absolutely love Blazing Saddles. It's offensive on so many levels, but I love this movie. It's a 1974 American satirical take on Westerns. In it, crafty railroad worker Bart (Cleavon Little) becomes the first black sheriff of Rock Ridge, a frontier town about to be destroyed in order to make way for a new railroad. Initially, the people of Rock Ridge harbor a racial bias toward their new leader. However, they warm to him after realizing that Bart and his perpetually drunk gunfighter friend (Gene Wilder) are the only defense against a wave of thugs sent to rid the town of its population. Directed by Mel Brooks, who also has several small roles in the film, the movie includes a star packed cast including Slim Pickens, Harvey Korman, Madeline Kahn, Cleavon Little, Gene Wilder, and more.

6. Favorite Book I Wish I Had Written 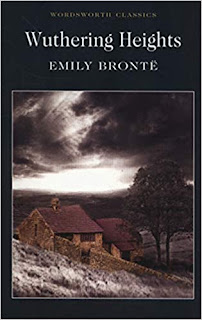 Wuthering Heights. Regardless of genre, 99% of the time I prefer books with a happy ending - life can be depressing enough. I want my characters to have a chance at "happily ever after." However, one of my absolute favorite reads of all time doesn't have that. Emily Brontë's only novel, was published in 1847 under the pseudonym "Ellis Bell". Although Wuthering Heights is now a classic of English literature, contemporary reviews were deeply polarised; it was controversial because of its unusually stark depiction of mental and physical cruelty.

Wuthering Heights is a wild, passionate story of the intense and almost demonic love between Catherine Earnshaw and Heathcliff, a foundling adopted by Catherine's father. After Mr. Earnshaw's death, Heathcliff is bullied and humiliated by Catherine's brother Hindley and wrongly believing that his love for Catherine is not reciprocated, leaves Wuthering Heights, only to return years later as a wealthy and polished man. He proceeds to exact a terrible revenge for his former miseries. The action of the story is chaotic and unremittingly violent, but the accomplished handling of a complex structure, the evocative descriptions of the lonely moorland setting and the poetic grandeur of vision combine to make this unique novel a masterpiece. The novel has inspired adaptations, including film, radio and television dramatisations, a musical, a ballet, operas, and a song by Kate Bush. 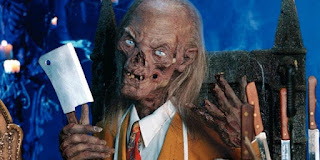 Tales From the Crypt was a horror anthology television series that lasted through most of the '90s and I dedicated a lot of my high school and college years to watching a show that gave us all some serious nightmare fuel. And not just because of the Crypt Keeper. The show did campy and cheesy horror exactly the way that it should be. It was not too self-involved, and never seemed to take itself too seriously. It was the perfect combination of campiness and unsettling horror.

8. Favorite Bucket List Thing I Probably Won’t Get Around To Doing

Visit every country in the world. There are 195 countries in the world today. Unless you count EPCOT, I have only been to three so far. For now, I'll settle for having visited half of the states in America. I'm working on taking my kids to each of the 50 at least once before they graduate. Did you know many of our states are larger than some countries?

I hope you'll play too. If so, please leave me a link below so I can visit yours!
Posted by Sylvia Ney at 7:38 PM

Email ThisBlogThis!Share to TwitterShare to FacebookShare to Pinterest
Labels: Blazing Saddles, Lilies of the Field, My Favorite Weird Things, Pajamas, Someone to Watch Over Me, SPAM Cheese Ball, Tales From the Crypt, Travel, Wuthering Heights

We can't count Epcot?
Love Blazing Saddles! I think that's cool you like it as well.
I remember Tales From the Crypt. We watched it all the time.


I am so glad to visit this blog. This blog is really so amazing.photoshop-image-masking-service