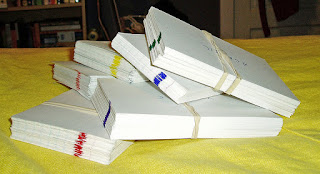 Have you tried anything like this? What kind of cards would you use? What would you add to your own deck?
Posted by Sylvia Ney at 8:36 AM

This has given me ideas for campfire story telling.. :-)

Not having ideas is one of those problems I have heard lots of people talk about but have never had.

Now, trying to decide WHICH idea to develop and staying committed to it, that's hard.

Deciding on how best to convey or proceed with an idea, that's hard.

I could see this game helping narrow all those options down a bit.

What a cool idea! I'm reworking a draft of an earlier book, so I have the characters and conflicts worked out for that one. But I may use cards like these for my next mystery. Thanks for the inspiration.