Thank you again to everyone who participated in my giveaways, or left reviews for my work. Your continued support means so much to me. As another thank-you in helping me to celebrate six years of blogging, and in response to requests to read more of my fiction, I am sharing the below story for Halloween. I would love to hear your thoughts - pros and cons. Thanks again! 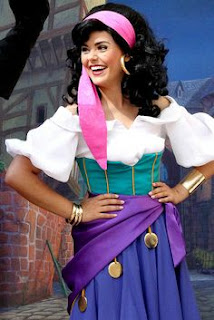 Jack let out a huff as he rocked from one foot to the other. How had he managed to get roped into chaperoning the school Halloween dance? After a long week with the law firm, it was not his first choice in how to spend a Saturday.
“You have to come,” his twelve-year-old daughter Julie had gushed. “Ms. Mills says we need five more parents to agree to chaperone or the school board won’t let us have the dance.”
One round-eyed plea from his daughter could convince him to do almost anything. He sighed. Those brown irises were perfect replicas of her mom, but Julie had inherited his blonde locks. Ever since her mom passed away three years before, he’d played the role of two parents, something not easy to do with all of the hours he worked. There never seemed to be enough time to spend with her which was another reason he was here now.
Jack watched Julie twirl past in her blue princess dress, flanked closely by her friends the vampire, witch, and scarecrow.
He’d have thought the two hours at the Fall Festival before the dance began would have been enough to wear them out, but clearly not. Many a sixth grader would sleep soundly tonight after the sugar crash.
He smiled to himself and watched his daughter laughing in line at the snack tables with the same trio, now joined by another princess, an angel, and Spider-Man. His baby was growing up too fast.
Jack let out another huff, frowned, and removed his jacket. They really ought to crank the air conditioner a little higher, maybe bring in a few fans.
“Here, you look like you could use one of these.”
He turned to face a beautiful Gypsy. The long multi-colored scarf wrapped around her brown hair sparkled in the strobe lights. She offered a cold bottle of water.
“Thanks, you’re a life saver, Mrs...?
“Ms. Mills, better known as the Great Madame Tooshka,” she added in a Russian accent when he clasped her hand in greeting.
He laughed. “Yes, I saw your tent at the fair. You had quite a line of kids waiting to see you.”
“That is because Madame Tooshka is best fortune teller in the land.”
“Oh, really?”
“For instance, I know your name is Jack Brenaman and you have daughter called Julie,” she sipped her drink before continuing without the Russian accent, “and she will always be your princess, no matter how big she grows.”
“Am I that obvious?”
“Only to someone with eyes.”
So, she had been watching him. Jack decided he really liked her smile. He found it infectious, and for the first time he found himself wondering about another woman. She’d said Ms., not Mrs.
“Do you have any children?” he asked.
“Yes, two hundred and seventeen of them at the moment.” She smiled at the confusion on his face before explaining, “I’m the school art teacher.”
He chuckled. “Oh, I meant of your own.”
“I know,” she smiled again. “The truth is I feel like they are mine. I love my job.”
He thought that was the best thing she could have said, until she added. “Of course, I can confide to you that Julie is a favorite.”
Perhaps she was just being kind, but the way she lovingly watched his daughter made him feel it was the truth. When she caught him staring at her, she smiled again. Enchanting. That was the only word he could think of to describe this woman. Am I ready to date again? Will Julie be alright with it if I do?
Jack took a sip of his water and looked again for his daughter. He tensed when he found her dancing with Captain America.
“Try to relax, Jack.” He felt a hand on his arm, and turned to stare into emerald eyes. “Julie is a bright girl who won’t tolerate any boy who might try to take advantage of her. Trust that you’re raising a smart, beautiful, and strong young lady.”
“Do you always know exactly what to say?”
“Madame Tooshka know all,” she teased, once again slipping into the accent.
“And does Madame Tooshka have a first name?”
“It’s Anna.”
There was that bewitching smile again. Jack didn’t want the spell to break.
“Well, Anna, I’ll be taking Julie trick-or-treating tomorrow night. Would you like to come with us?”
“I can’t. I’m expecting a lot of my students to come trick-or treating at my house.”
“Of course.”
“But, maybe my house could be your last stop? I can have spaghetti waiting on you two around eight?”


“Spaghetti is one of our favorites,” he felt excitement bubbling inside. Madame Tooshka had cast her spell, and she might just be the key to his future.
Posted by Sylvia Ney at 2:56 PM

Ah, a Halloween romance! I'm going to believe it worked out well for them - a Halloween wedding with sweets instead of confetti! :-)

Lisa - Thanks, and I love that idea of throwing sweets!

what a charming story!