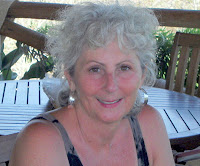 Melissa Goodwin, author of newly published The Christmas Village, currently lives in Santa Fe, New Mexico. While she says this is a very fun and cool place, she and her husband just sold their home, are in the process of buying an RV, and plan to travel in it most of the time over the next year or two.  For more information about Melissa, you can find her on her personal blog: http://writeryogini.blogspot.com
1) How did you develop an interest in writing? I was a kid who loved to read, and I very much lived inside my head. I was always mentally narrating my life, as though I was telling it to someone as a story. Yes, I was an odd little duck! Then somewhere around the age of ten, I had this sudden “knowing” that I wanted to be a writer. I actually think of that realization as being a little like when the character Hermey, in the old holiday movie Rudolph the Red-nosed Reindeer, declares, “I want to beeeeeee a dentist.” There was a moment, when I had just read The House at Pooh Corner, when I thought, I want to beeeeeee a writer. I distinctly remember thinking; I want to write books like this.
2) Tell me a little about your blog. My blog is called writeryogini, because I am a writer and a yoga teacher. I started the blog several years ago when I was going through yoga teacher training. It was a place where I wrote essays that related the principles of yoga to our daily lives. Then, when I finished writing The Christmas Village, the blog evolved to being more about the process of writing and getting published. Since then it’s evolved to be about whatever I feel like writing about in the moment – sometimes it’s about the book, but just as often, it’s about life.
3) I see you are working on a MS. Can you please tell me a little about it? I’ve just published The Christmas Village, which is a middle-grade novel. It takes place at Christmas-time, but it’s as much an adventure as it is a Christmas story. The idea came to me a few years ago, when I was gazing at our miniature Christmas village set out on a table, and I began to wonder, Who lives in that cottage? And that one? What do they look like? What are they having for supper? And it took off from there.
I’ve already started my next book, which will be young-adult historical fiction.  The story is inspired by my mother’s real life experience as a 14-year-old evacuee to Wales at the start of World War II.  I really don’t know much about her experience – only what she wrote about it later in an essay for her high school newspaper. I think she talked about it when we were younger, but then later she got Alzheimer’s and my chance to ask her about it was lost. Writing this story is my way of imagining “what might have happened,” and of keeping her memory close to me.
4) What other styles do you write - genre novels, poetry, articles, memoirs etc.? My early writing career was focused at two odd extremes – I wrote perhaps 40 or 50 pieces for children’s magazines, and I wrote just as many magazine articles on aging and care giving. In between, I’ve also had memoir pieces published in newspapers and in magazines like Guideposts’ Angels on Earth. I don’t write poetry that often, but last year, one of my poems won 10th prize in the Writer’s Digest Annual Poetry Competition. Everything interests me, and I don’t like to be boxed in. So I write what comes to me, and I don’t worry about sticking to a particular genre.
5) What authors do you admire? There are so many brilliant authors past and present and so many books that I have loved. My all-time favorite book is To Kill a Mockingbird by Harper Lee. I love Mary Stewart books, and have been re-reading them because they put me in the right mood for the YA book I’m working on next. I very much admire J.K. Rowling for her ability to weave the threads of her story through seven books and so many years. And this year, I really enjoyed the book, Unbroken, by Laura Hillenbrand. I love it when a writer can take a true story and make it read like an exciting adventure.
6) What do you do when you have writer's block? I don’t really get writer’s block anymore – not since I learned to let it be okay to just sit down and write whatever comes to me. I have learned to trust that once I start pecking away, something will come. And I’ve learned to let it be okay that it doesn’t have to brilliant or even very good – there will always be something that is worth keeping, a seed of a new idea or a new direction. When I stopped expecting my writing to be good the first time it comes out of me, and to accept that most of writing is actually revising, I no longer felt blocked.

7) How long did it take you to write your current MS? It took me about three years to write The Christmas Village. During that time, both my parents were failing, and I went through periods of sadness that made it hard for me to write. At other times though, the sadness fueled the emotion of my writing. But it was very stop-and-start. Also during this time, I trained to become a yoga teacher, and invested a lot of time and energy in that. I think it was actually a way for me to process my grief.  After my dad died, I suddenly felt ready to commit to finishing the book. In April of 2010, after two years, I was only about a third of the way finished. I set a goal to finish writing it by October 1st, and I did. I sent the manuscript to agents in October. By mid-November, I had two agents request the full manuscript, and in December, both offered to represent me. So in a way, the book took several years to write, but once I focused on it, everything actually happened quite fast.
8) Are you part of a critique group or writer's guild? I am a very solitary writer. I know that many people find critique groups helpful, but I find that I must listen to my own voice. I have a few people with whom I share my work once it’s well underway, and I trust them to give me honest feedback and to call me on anything that isn’t quite right.
9) What is your writing process like? Certain hours that you find more productive, a routine, a set amount of time or a number of pages you make yourself write ever day etc.? To finish writing The Christmas Village, I set aside certain days of the week to write as much as I could. I tend to write in spurts and then have to rest. I need time for the creative juices to build up and for new ideas to creep in. I don’t go by a set amount of time or number of words or pages, I write until I get tired. I’m pretty self-motivated, so I don’t feel that I have to set strict goals around numbers of words or pages. I want to write the story, and I trust myself to do the work, but I also believe in giving the mind time to rest and rejuvenate.
10) Would you care to share your opening paragraph (hook) with us? Sure! Here is the first paragraph from The Christmas Village:
The rain just made everything worse. Jamie pressed his nose against the passenger window and peered into the darkness. The car whizzed past house after house decorated with colorful Christmas lights, but on this dismal night, the scene only reminded him of those sidewalk chalk drawings that look blurry and sad after a rainstorm.
The Christmas Village can be ordered on Amazon: http://www.amazon.com/Christmas-Village-Melissa-Ann-Goodwin/dp/1463646259/ref=sr_1_1?ie=UTF8&qid=1317906903&sr=8-1

And the trailer can be viewed: http://www.youtube.com/watch?v=my9vTx-Z-sk

"Read my books" - I LOVE the title of your blog...thank you for the kind words - I'm glad you liked the opening paragraph.

Sylvia, thank you again for hosting me with this interview today on your terrific blog.

Just want to add that the video trailer for The Christmas Village, created by my brilliant nephew, film-maker John Goodwin, is now on YOUTUBE. Please share it with your friends! Here is the link:

Melissa, I know exactly how you feel when you write. Write until you get tired :). So well put.

Good luck! It's a great interview, wonderful questions and answers.

Hi Collette, thanks for the kind words. It's always so great when we connect on those points. Seems like there are all these "rules" for writers, but we each have to find what works for us. I'm so pleased to meet you.
Melissa

It's nice to hear from a solitary writer that uses a few chosen to read.

Thanks Southpaw. I spent so much time when I was younger listening to others, so I have to stay inside myself for a long way into the process. Then my trusted "team of consultants" :-) helps me finetune. That's just what works for me.