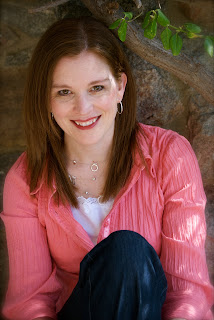 Jody Hedlund is an award-winning historical romance novelist and author of the best-selling book, The Preacher's Bride. Currently she makes her home in Michigan with her husband and five busy children. You can find her on Facebook: Author Jody Hedlund and on Twitter @JodyHedlund.
Her second book, The Doctor’s Lady releases today, and she has agreed to give away a copy of her new book to one of my readers. (Rules are stated after the interview.)
1. Please give us a brief summary of the book:
Priscilla White bears the painful knowledge that she’ll never be able to be a mother. Having felt God’s call to missionary work, she determines to remain single, put her pain behind her, and
answer God’s call.
Dr. Eli Ernest wants to start a medical clinic and mission in unsettled Oregon Country. He’s not interested in taking a wife because of the dangers of life in the west and the fact that no white woman has ever attempted the overland crossing.
Priscilla and Eli receive news from the mission board: No longer will they send unmarried men and women into the field. Left scrambling for options, the two realize the other might be the answer to their needs.
They agree to a partnership, a marriage in name only that will allow them to follow God’s leading into the mission field. But as they journey west, this decision will be tested by the hardships of the trip and by the unexpected turnings of their hearts.
You can find the book trailer: http://www.youtube.com/watch?v=3n-UrDeevrE
2. What was the inspiration behind The Doctor’s Lady?
This book is inspired by the true life story of Narcissa Whitman, the first white woman to brave the dangers of overland trail and travel west. In 1836, she married Dr. Whitman, and then the next day left her childhood home for the purpose of starting a mission among the Nez Perce natives.
It was my hope in this story to bring Narcissa Whitman to life. This heroic woman has often been ignored and at times even disparaged. In reality, she exuded incredible courage to attempt a trip many proclaimed foolishly dangerous. It was called an “unheard-of-journey for females.” Because of her willingness to brave the unknown, she led the way for the many women who would follow in her footsteps in what would later become known as the Oregon Trail. 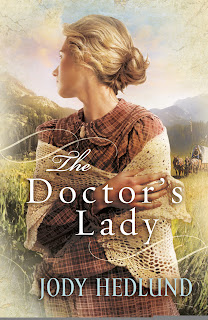 3. What percentage of The Doctor’s Lady is true? And how much did you add?
As with any story of historical fiction, the large majority of what I’ve written was truly from the depths of my imagination, all of my creative meanderings of “what could have happened.”
However, in my research of the Whitmans, I drew from numerous biographies. While I wasn’t able to stick to every historical detail in complete accuracy, most of the story outline is taken
directly from Narcissa’s diary.
I tried to follow the trail they took west as closely as possible. While I was unable to include every stop and incident of their travel for the sake of brevity, I did try to capture the essence of their journey. I included their travel first by sleigh, then steamboat, and lastly by wagon and horse.
Make sure you read the Author’s Note at the end of the book where I explain in more detail which specific incidents came from the pages of her diary and what I made up for the sake of
the story.
4. What message do you hope readers take away?
I hope readers are inspired to try new things and brave dangerous prospects in the pursuit of their dreams. When we go after the things that matter, we’ll have to take risks and we’ll
experience setbacks and obstacles. But if we persevere, we can reach our destination and do great things along the way.
For a chance to win a copy:
1. You must be a follower of my blog and Jody’s http://jodyhedlund.blogspot.com/
2. Leave a comment with this post by September 5, 2011.
3. Each mention of this post or Jody’s blog on Twitter, facebook, your own blog/website will earn you an additional entry. Again, this must be done by September 5, 2011. Just leave me a link in the comments below.
4. A winner will be announced here by September 7, 2011.
Best of luck and please visit again on Saturday when Jody will be sharing more news and information!
Posted by Sylvia Ney at 6:48 AM

I beginning to believe that we writer's have an affinity for having five children. Nice review!

I know a lot of writers that have five children too! Makes for a lot of fodder for our stories! :-)

Jody did a great job bringing the Whitmans' story to life in her novel. I'm impressed by how many of the actual events from their journey she wove into the story. The Doctor's Lady is a gripping tale that will keep readers ignoring chores and losing sleep while they race to see what happens to Eli and Priscilla.

What a great interview! Thanks for introducing us to Jody's book. She's got a really cool contest running on her web site, too, as part of the book release. If you're interested, you can learn more about it here:BE A TRAILBLAZER Contest
Have a sunny day,
Emily

Those were great interview questions :-) I've wanted to try my hand at historical fiction - I really enjoy reading it.

Writing from a diary. So cool to see into someone's mind from so long ago, and have the honor of filling in the gaps to make the story complete. Sounds like amarvelous tale.

Awesome! I really enjoyed reading The Doctor's Lady. Jody has a way of bringing the little historical details to life.

(don't include me in the giveaway, I already have a copy. just wanted to comment!)

Great interview THANKS! I can't wait to read this as I enjoyed The Preacher's Bride and this sparks even more interest in the history behind.
Donna

I enjoyed reading your interview with Jody and would love to win a copy of her new book. I am a follower of both blogs.