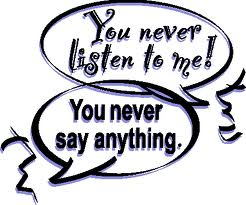 Some authors have a deep rooted fear of dialogue. They converse coherently on a regular basis, but when it comes to writing, they lock down.
They either feel or have been told the dialogue in their story sounds artificial and dead. With little more information or analysis, writers aren’t sure how to repair the damage.
1. Direct Dialogue – This would be the active form or “real time” version of your story. It’s also the most commonly employed by writers. The problem comes when authors forget that humans frequently interrupt, talk over each other or use incomplete sentences. It’s important to remember to interrupt your dialogue with characterization, exposition, description and tags. This will create a natural rhythm for the reader. When you carry on a conversation with someone, you don’t sit static and talk or respond like a robot. You move a stray hair from your face, glance to check on the kids playing outside, think about the work left sitting on your desk etc. Use some of these in your writing.
2. Indirect Dialogue – The narrator sums up the dialogue instead of showing every word of mundane or inconsequential facts. You want the reader to know these things happened, but you don’t want to slow down the story. For example:
It had been ten years since they had seen each other. They walked and talked. They talked about the weather. He told her about traveling abroad and the jobs he held when he returned. She told him about her failed marriage, where she lived and where she planned to move…
Whichever you choose (you might attempt both) there are a few rules to remember.
1.  When sharing backstory, try not to relate an entire history in one sitting. When we gossip about others or talk about ourselves in real life, we do so in episodes or one event at a time. No one relates their entire history in one meeting. Your characters should be the same. Sprinkle the facts throughout, and always hold something back until the end.
2.  If you choose to have a character(s) using an accent or slang, use it phonetically when first introducing the character. Afterwards, simply imply or remind your reader of the dialect. Otherwise you run the risk of losing your reader if they are struggling to read an unfamiliar style of speech.
3.  Keep your speech tags simple. Use “he said” or “she said” in most cases. Any other tag should only be used sparingly so as not to distract the reader from the story. Also, you only need to identify the speakers the first time in a conversation. If you are writing successfully, the reader will know who is speaking without tagging “he said” or “she said” after every single line of speech.
If you still feel your dialogue is lacking, try adding an argument or misunderstanding into the scene. Nothing builds emotional tension better than conflict.
Posted by Sylvia Ney at 5:44 AM

Dialogue is usually the easiest for me because I start thinking about my characters talking to each other when I construct a scene. But, there have been times where I've struggled with it and these pointers are helpful reminders about the basics. Great post for D. :)

I used to hate dialogue until a teacher gave us an exercise to write ONLY in a dialogue. No tags, nothing. Then I learned that you can convey a lot without using "he sighed" and stuff, and also that it's FICTION. Take out the boring, telling-nothing sentences and make every word count!

Dialog can be tricky...gotta pare it down to the absolute essentials. No, "Hi, how are ya's?" but "Hey, you meeting Ricky at the docks tonight?" Direct. To the point. Keep the plot moving.

Interesting, I heard to avoid using "said" too much. Instead, put in actions, such as: "I can't go to the prom with you!" Phyllis rolled her eyes and shook her head.

Informative news on Dialogue. Thank You.

Good points, Sylvia!
Seems like quite a lot of us have decided D is for Dialogue. You've covered several of the points I've also made in my blog today! I love dialogue because I can hear my characters talking in my mind.
http://paulamartinpotpourri.blogspot.com

Have you ever tried to write a pure 'Dialogue Story'? Where dialogues only make your story move along. I've tried that in a creative writing exercise. You should try that, it's an interesting experience! :-)

P.S. Before I forget, my A-Z deals today with D for Drehbuch (screenplay)

I love writing dialogue. It's so much fun to make it sound realistic and balance what the reader needs to know with what the characters are saying. Great "D" post, and very helpful with listing the different types of dialogue as well. I wish more people used indirect, lol.

Hi Sylvia .. I must now keep an eye open when I'm reading a novel .. thanks - interesting read.. cheers Hilary

Great tips! I don't usually have trouble with dialogue, but every once in awhile, I get stuck or wonder if it's going stale or if there's too much or maybe even not enough. I'm going to keep your advice in mind! :-)

Screenwriting was a great cure for me to overcome my fear of dialogue.
Great post!

Good advice. It's tricky to write dialogue that feels right, and most people don't realise that dialogue isn't as simple as writing down what people ACTUALLY would say in a real situation.

Really nice breakdown of dialogue options. I find that listening to real conversations critically helps as well. (Listening to the way people phrase and pace things, for instance.)

Great post! Lately I have been having trouble with dialogue. Thank you for the helpful information.

Good info. Dialogue isn't always the easiest for me. I use indirect dialogue a lot.

These are some great tips! Thanks!

Great quick tips. I use both types though usually direct. When I start worrying about my dialogue I read some of my favorite authors who do dialogue so well like Robert Parker.

wish I'd read this in the short time I was teaching English. Interesting post. Thanks for your comments on the blog, fraid I am just catching up with back comments now. I failed miserably to keep the posts short, tho.

Great post! My characters' dialogue has gotten considerably better since I started working with my CPs. I still have to consciously use plainer dialogue tags instead of trying to elaborate the way the dialogue is being written by saying things like "he exclaimed" or "he replied". LOL

That's so interesting - I was reading up on this very topic yesterday and I almost posted it as my D topic! Good thing I didn't, hey :-)
(Hmm... I wonder how many blogs will post the same topics during this month-long challenge)

Great post! I'm one of those people who is afraid of dialogue, but I've been working on it...

I love this post, and I soooo need it right now. I've bookmarked it. Thank you!

Thank you for your words and visit! Great advice on dialog. Thanks!

This is so me. I want so much to write a novel but am so intimidated by dialogue. I will take your advice.