6 Authors and Their Literary Stops in Southern California 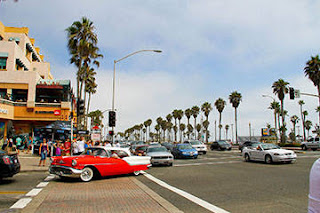 Known for its abundance of sunshine and movie stars, Southern California has also offered many writers inspiration with its unique environments and colorful array of people.

1) F. Scott Fitzgerald - there are two distinct places that bear his presence. The first is his West Hollywood home at 1443 N. Hayworth Avenue in West Hollywood. More than a decade after publishing The Great Gatsby, "The Great American Novel," Fitzgerald moved to Hollywood hoping a career in screenwriting would bring him the continued success and lavish lifestyle he and Zelda so loved. Unfortunately, he died broke just a couple of years later following another heart attack. The second is Gatsby Books at 5535 E Spring St. in Long Beach. Inspired by Fitzgeralds legacy, this new and used bookstore offers complimentary coffee, a generous selection of Fitzgerald work, frequents readings, and other literary events.

2) Ray Bradbury -  this Los Angeles resident got his start at age 14 writing for George Burns. As if that wasn't impressive enough this scifi author went on to bring the public some of the most memorable tales of the genre. If you're in the area and want to feel close to this beloved author, spend some time in Clifton's Cafeteria at 648 S Broadway in Los Angeles, CA. Bradbury ate many lunches and dinners here. In the 1930s, the Los Angeles Science Fantasy Society held meetings in their Brown Room, indulging in soul food and discussing weird science. Bradbury continued to visit Clifton's over the years, even celebrated his 89th birthday here. Today, you can visit his booth on the third floor and admire memorabilia that Bradbury's family donated.

3) Steve Martin - his first job was at Disneyland in Anaheim, California. Located just two miles from his house Martin started out selling guidebooks, keeping $.02 for every book he sold. He graduated to the Magic Shop on Main Street, where he got his first taste of the gags that would later make his career. He also learned the rope tricks you see in ¡Three Amigos! from a rope wrangler over in Frontierland. Martin later landed his first writing gig for The Smothers Brothers Comedy Hour. He began rubbing elbows with and learning from a number of other well known writers including a brief relationship with Hollywood IT girl Eve Babitz.

4) Eve Babitz - notorious for indulging in drugs and romantic conquests (including Jim Morrison, Steve Martin, and Harrison Ford to name just a few) Babitz still resides in Hollywood. Ports (now called Jones)7205 Santa Monica Blvd.; Los Angeles, CA was a favorite hangout for the author who was said to have come in around noon on most days to have food, trade pills with others, and continue on to enjoy the evenings. The Beverly Hills Hotel 9641 Sunset Blvd.; Beverly Hills, CA 90210 was also frequently visited by Babitz with her variety of lovers.

5) Charles Bukowski - born in Germany, Bukowski was about as "L.A." as a writer could get. He's most known as an alcoholic, a misogynist, and a reckless gambling man. However, his work reveals a tenderness, love, and pain not always expressed in his daily life. De Longpre Apartment at 5124 De Longrpre Ave.; Los Angeles, CA is where he lived from 1964 to 1973 "somewhere between alcoholism and madness." It's also wheret he completed seven novels, including Factotum. The Santa Anita Racetrack at 285 Huntington Dr.; Arcadia, CA. Bukowski loved his horses. He was a gambling man, and life at the tracks was a common theme throughout his career. He spent many drunken afternoons at the Santa Anita Park, betting on the horses. His ex-wife Linda has hinted that this may be the reason why the nearby Huntington Library displays some of his original work. The King Eddy at 131 E 5th St.; Los Angeles, CA - he was a regular at countless watering holes reaching beyond L.A.'s city limits. Some of his old haunts included Cole's and the Frolic Room. (He even had a delivery system set up at the Pink Elephant Liquor Storewhen he lived in Los Feliz.) However, Bukowski wasn't always an admired poet who was welcome in bars. It was here, in Skid Row, that he'd plant himself and wash down his troubles with countless beers.

6) Joan Didion - While Didion was raised in Sacramento, she made L.A. her home after kicking her career off at Vogue magazine in New York. From personal essays to novels to political journalism, her writing is as eclectic and extensive as Southern California itself. At the age of 84, she continues to produce noteworthy works while looking back at her success and loss itself. House in Hollywood at 7406 Franklin Ave.; Los Angeles, CA 90046. A friend of Didion's described this area of Hollywood as a "senseless killing neighborhood;" perhaps this was an omen for the nearby Manson murders that were to come. Didion lived here with her late husband, John Dunne, and their daughter while penning The White Album. She lived in a constant state of horror, as reflected in her writing, until she moved up the coast with her family in 1971. The Freeway - seriously. When you live in Southern California, you learn to live with the freeway, to accept your time on it, and it becomes part of your daily landscape. As Carolyn Kellogg stated, "Writers who know Los Angeles... have done some of their best writing about freeways. Think Joan Didion in her novel Play It as It Lays... The rhythm of Los Angeles's roads has seeped into its decentralized heart, into the minds of writers for decades, and you, too, will hear it as your wheels spin and spin and spin." Try driving down the 405 to San Diego, or head northbound on the 101. You'll see that the freeway becomes a character in and of itself.