It's Thanksgiving season here in the United States. This holiday often gets overlooked in America because everyone is in such a hurry to get to the Christmas festivities. However, it's still one of my favorite holidays. This is a special time to celebrate your loved ones, friends, fortunes, and good food.

As a thank-you to my readers and fellow bloggers, I wanted to share a short Thanksgiving romantic fiction piece I wrote (about 800 words). I hope you enjoy! 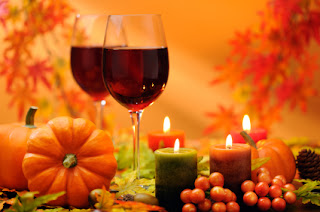 Grace stepped back after placing the last dish upon the table. The smell of roasted turkey filled the air. Her customary dressing, green beans, rolls, and chocolate chip cookies sat nearby. Why had she thought cooking a full Thanksgiving meal would make her feel better?
Tears stung, “It’s just the onions,” she whispered to the empty room. For the first time in more than twenty years her home was quiet on this holiday.
I’ll just watch an old movie, maybe read a good book, and enjoy all this food. At least leftovers will mean I won’t have to leave the house on Black Friday.
Knocking at the door startled her.
She walked quickly to the side window to peek out. Who on earth…
“Grace, it’s me.”
“Bill?” she swung the door wide. “I thought you would be in Louisiana with your daughter and her family?”
“Me too. Her husband called early this morning. She and the girls have the flu.”
“That’s terrible.”
He grunted his agreement and then took in the scene at the table. “I’m sorry if I’ve interrupted. I just wanted to say Happy Thanksgiving.”
“Nonsense, you’re not interrupting. You’re staying for a proper Thanksgiving. I hope you’re hungry.” She pulled Bill further into the room so she could close the door behind him.
A look of relief crossed his face before he smiled at her. His smile soon turned to a light chuckle.
“What?”
He reached out a large callused hand and cupped her cheek briefly before wiping her nose and chin with his thumb. Sensations jolted through her and it was all she could do to prevent herself from leaning into him.
“Flour,” his voice seemed somehow thicker when he removed a white powdered hand from her face.
Grace laughed nervously. Why did she feel anxious and giddy? She had known Bill for years. He was the best neighbor a single mother could hope for. His daughter was a few years older than her two girls. Bill had already been a widow when she moved here. He helped her keep her house in working order, and she had helped his daughter with more feminine tasks such as picking out prom dresses, shoe shopping, and boy gossip. Since those earliest days, they had all been good friends.
Now, the girls were all grown. His daughter with a family of her own, and both of her girls were off to college, the youngest having just left in September. Grace shook her head to dispel the sadness.
“Let’s wash up. Then we can eat.”
As they ate, they visited about changes to each family over the years.
“Do you ever think about getting remarried?” he asked her later over cookies and coffee.
“I don’t know if I could. You?”
“It’s something I’ve been thinking about a lot lately.”
She stared into his grey eyes with the familiar laugh lines around the edges. He was so very attractive. She felt a tinge of something she couldn’t quite identify and she frowned.
“Is something wrong?”
“No,” she drew out the word before continuing. “Honestly, I’ve been a little surprised that someone hasn’t lassoed you yet. I just assumed you were a committed bachelor.”
“I have been, but now I’m hoping to be committed to someone.”
“Oh,” unease spread through her limbs. I bet it’s Ms. Hanks from church. She’s always doting on him, bringing casseroles and pies by his house. She should probably be happy for the two of them, but somehow she felt something closer to jealousy and anger. He had been a part of her life for so long now. She had come to rely on Bill, and expect him to be around. She was being selfish and he was staring at her intently. “I’ll clean up while you turn on the television. The Cowboys game should be starting soon.”
“Grace,” he grabbed her hand when she started to rise. She fell back into her chair, unable to meet his gaze. “The truth is, I’ve been committed to this woman for a long time now, but I was afraid she wasn’t ready.”
She looked up when he didn’t say anything more. He still held her hand and seemed to be waiting for her to speak. She swallowed hard before offering a smile. “Don’t worry, Bill. I’m sure she’ll accept.”
“Will you?”
Her shock must have been obvious. He squeezed her hand.
“Grace, I’ve been thankful every day since you moved in that you were a part of my life. We practically raised our girls together. I love you and I want you by my side for the rest of our days.”


It took a moment to find her voice, but the anxiety evident in his eyes helped. “I love you too, and I’ll be thankful every day I get to be your wife.”

Happy Thanksgiving!
Posted by Sylvia Ney at 12:30 AM

I like a happy ending! Funny how one person just doesn't see it at first.
Have a great Thanksgiving, Sylvia.

Thanks Alex - you too!

A sweet sweet story. I wasn't expecting such happiness at the end.