10 Reading Venues Worth a Visit 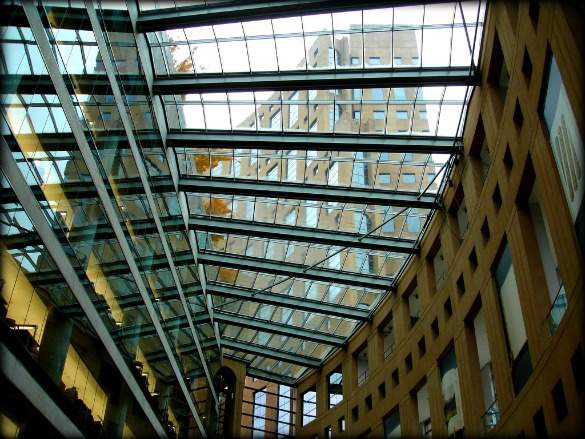 The beginnings of the Vancouver Public Library date back to the beginnings of Vancouver as a whole, back in 1867. This year marked the construction of the area’s first sawmill, the Hastings Mill. Over the years, the area around the Hastings Mills became the location of the Hastings Literary Institute. A Central Library was constructed at 750 Burrard Street. This building, however, became outdated and overcrowded, and eventually led to the creation of the Library Square, a new central library. Architects Moshe Safdie, Richard Archambault and Barry Downs won the design competition for the new library, which was opened in 1995. Today, the Vancouver Public Library, which includes the Library Square, is the third largest public library system in Canada. It has over 373,000 cardholders, who borrow more than 9 million items annually. Vancouver Public Library is accessible to all citizens of Vancouver and moreover, has an extensive virtual library collection. You can find information on visiting the Central Library, including opening hours, here. 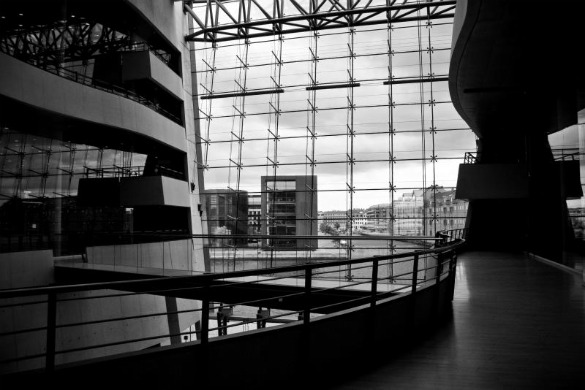 The Royal Library in Copenhagen is the largest library in the Nordic countries. It serves both as the national library of Denmark, as well as the university library of the University of Copenhagen. Its collection includes various historical treasures. To be exact, all the books that have been printed in Denmark since the 17th century are archived here. The first Danish book, which dates back to 1482, is also deposited here. In 1906, Hans Jorgen Holm constructed the first building, located at the Slotsholmen site. This building’s central hall is a copy of the Charlemagne’s Palace chaped in the Aachen Cathedral. The newer building (pictured above and located adjacent to the old one) is called the Black Diamond. It was designed by Danish architects by Schmidt hammer lassen. It holds the name of “Black Diamond” because of its outside cover of black marble and glass. In addition, it is worth noting that it contains a concert hall in addition to the library, both of which are open for visits. 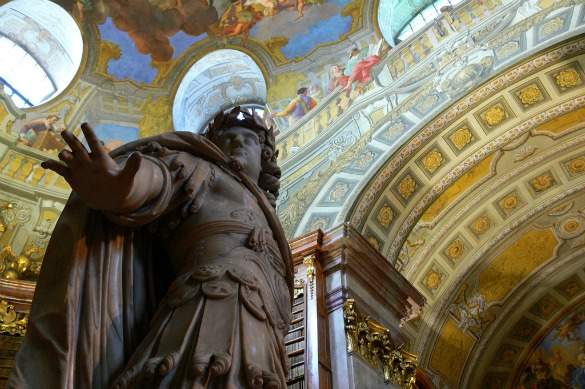 The Austrian National Library is the central academic library of the Republic of Austria, and as such, spans a rich history and tradition that dates back all the way to the 14th century. Its mission is to serve as a “centre of information and research oriented toward serving the public, as an outstanding national memory institution and as a many-side centre of education and culture.” The part especially worth visiting is the Baroque State Hall, which prides itself as being one of the world’s most beautiful historic libraries. It was Emperor Charles VI who ordered it to be constructed as his Court Library. Architect Johann Bernard Fischer von Erlach planned its construction, and it was built from 1723 to 1726 by his son Joseph Emanuel. Court painted Daniel Gran, in turn, can be thanked for the beautiful ceiling frescoes. Admission prices and opening hours of the State Hall are listed here. 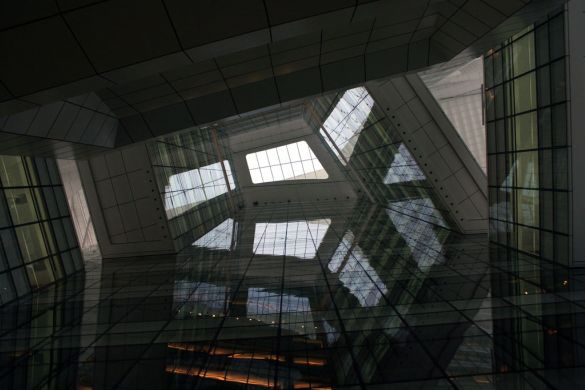 
5. Law Library of the University of Zurich (Zurich, Switzerland) 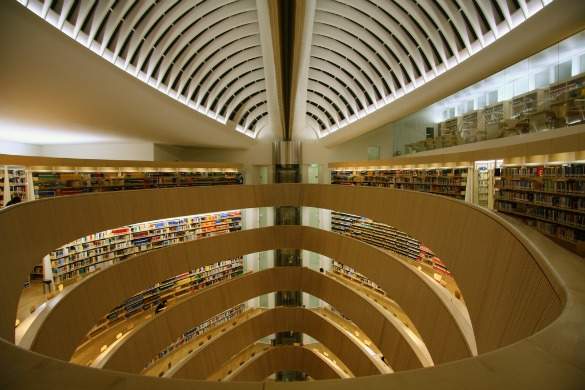 Some libraries are known for the great architects that built them. The Law Library of the University of Zurich is one of them. It carries the famous name of Spanish architect Santiago Calatrava, who has his main office in Zurich. The library was opened in 2004, after 15 years of planning and construction. The original building dates back to 1908, and Calatrava’s extended version cannot actually be seen from the street. The library’s collection itself holds about 170,000 books and 700 magazines. 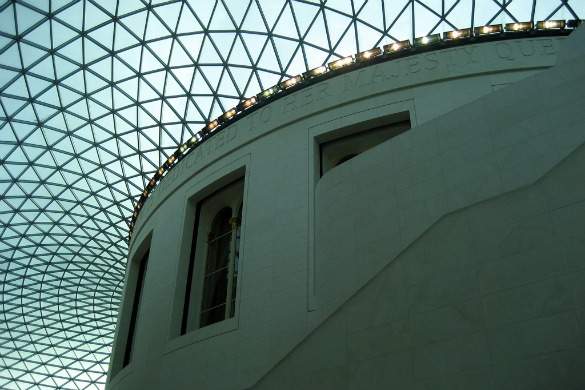 If Calatrava is the name associated with the Law Library of the University of Zurich, the architect that made the Great Court famous is Norman Foster. He and his team of architects transformed the British Museum’s inner courtyard into the largest covered public square in Europe. Enclosed by a spectacular glass roof, we find the world-famous Reading Room at its centre. Since the Reading Room is officially part of the Museum, it is open for visits. You can find opening hours and admission prices here. 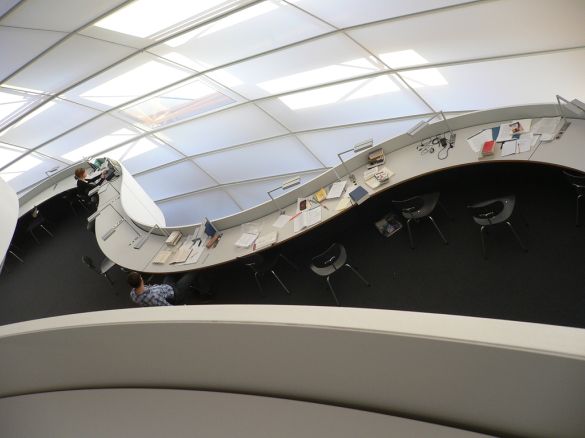 The Philological Library of the Free University in Berlin is another work of Foster and Partners. Since the end of World War II, the Free University has been not only of the city’s symbolically most important institutions, but also one of the leading universities in Germany as a whole. It occupies a central role in the capital’s intellectual life. Its redevelopment, in turn, includes the restoraction of the university’s Modernist buildings and the construction of the new Philology Library, which was built from 1997 to 2005. 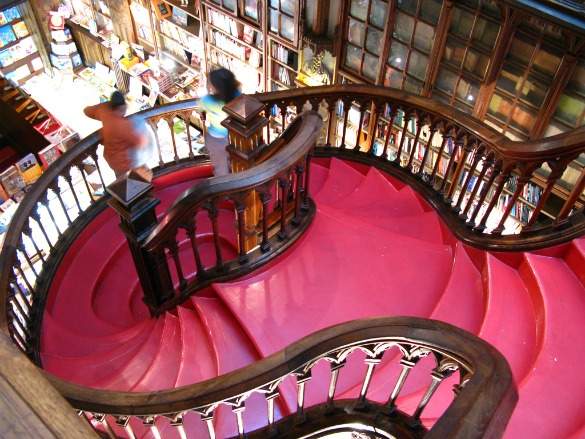 A bookshop is not a library per se, but it certainly qualifies as a place where books are stored (and sold). The Lello Bookshop, called Livraria Lello in Portuguese, is notorious for its windy staircase and vibrant pink color. It was built in 1906 by an engineering professor, Xavier Esteves. Packed with old and new books, it provides a wonderful experience for book lovers and architecture aficionados alike. 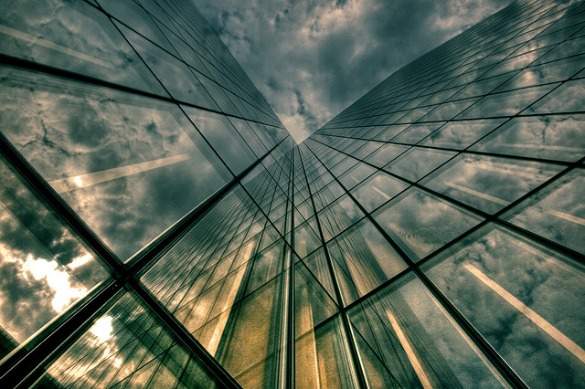 National libraries are national landmarks. In France, the National Library is located in the capital: Paris. Its origins trace back to the royal library founded at the Louvre by Charles V in 1368. In 1998, the French president Francois Mitterand ordered the construction of a new building, which contains more than ten million volumes. An exhibition space is also part of the new building. 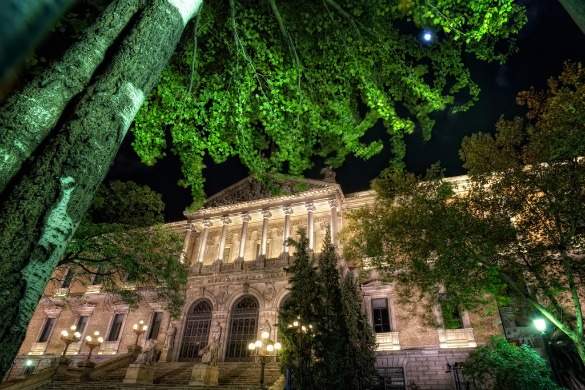 The National Library of Spain didn’t always carry the name of National Library. It was founded by Felipe V at the end of 1711 and opened its doors in March of 1712 as the “royal public library.” In 1836, it passed from being royal property to belonging to the government, and then, first became known as the National Library of all of Spain. As is the case with the national library in Paris, this building is also an exhibition space and houses temporary exhibitions that are open to all.
Posted by Sylvia Ney at 9:13 AM

Fabulous post on libraries and thanks for including our beautiful library in Vancouver, BC!

I have a fondness for libraries having spent many a happy hour there in my teens. Cool, quiet, full of knowledge and adventure - what's not to like? Almost any library will do.

These libraries are a work of art. You should check out Sarasota, Florida's Selby Library. It's another work of art as well.

These certainly don't resemble the local library in my area. The architecture is striking. So tall, so many, many, many books. Just...wow!

I LOVE the staircase at Lello bookshop. To me, that is the most enticing of the lot. I think books belong in places that tickle the senses and invite the mind to wander, exploring what's around the next corner...

Fabulous libraries. I'd probably be too overwhelmed to read or check anything out.

What an interesting blog, introduced by a thought-provoking photo. The unusual wall painting of the dwellings is also a strangely modern interpretation. Something like this hieroglyphic view of a park by Swiss painter Paul Klee, http://EN.WahooArt.com/A55A04/w.nsf/OPRA/BRUE-8LT475.
The image can be seen at wahooart.com who can supply you with a canvas print of it.