Many of the great novelists and poets of history have enjoyed a cocktail (or six). From Dickens to Hemingway (well, especially Hemingway), many literary geniuses have had a regular bar where they could drink, hold court, drink, ponder the meaning of life and drink some more. Some of the bars where these famous minds congregated have become minor tourist attractions where lovers of literature can gather, share a pint and try to soak up some of the glamour and wisdom of the past. Here are some famous bars where you can get close to the legend of your favorite writer:

1. The Eagle and Child – Oxford, England 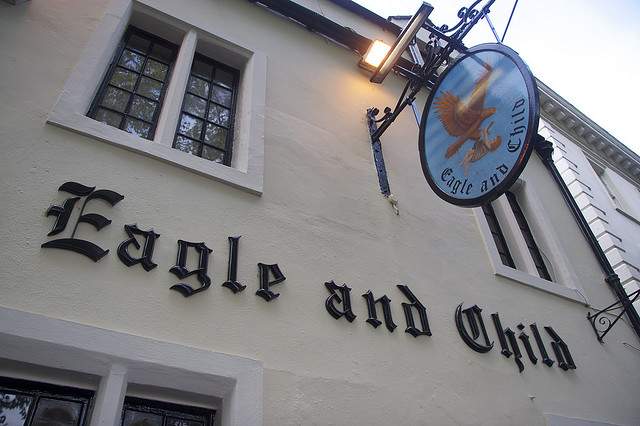 This unassuming pub on the outskirts of Oxford University was host to what was probably the most epic writer’s group of all time. The self-proclaimed Inklings were a group of professors who would meet up weekly to have a drink and compare manuscripts. Among their ranks were CS Lewis, author of the Chronicles of Narnia and JRR Tolkien, creator of The Hobbit and Lord of the Rings. The Inklings were known to hole up in a back room, now referred to as the Rabbit Room. You can still grab a table in the back and marvel over the photos, drawings and other mementos of these famous fantasy writers. 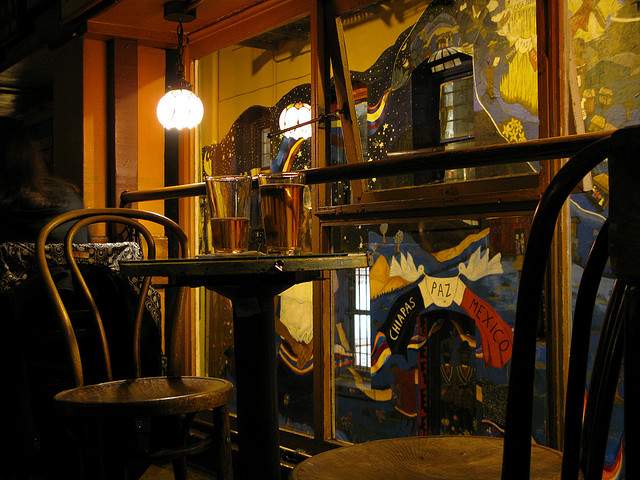 If you find yourself in San Francisco throw on your black turtleneck, dark sunglasses and grab your beat up copy of On the Road. Just off of Jack Kerouac Alleyway, the Vesuvio Cafe once played host to many of the hip irreverent writers of the Beat Generation. Neal Cassady, Allen Ginsburg and, of course, Kerouac himself often frequented this dive bar just across the street from the famous City Lights bookstore. There’s a famous story of Kerouac holing up in the bar, getting incredibly wasted and missing an important meeting with Henry Miller. Nowadays the bar has become a quirky tourist attraction, catering specifically to book-lovers who want to soak up this era of San Francisco history. 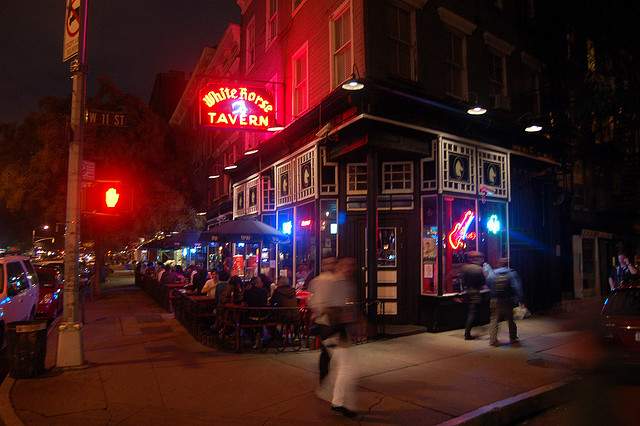 Across the country in New York City, the Beats and Bohemians of the 50′s and 60′s flocked to the White Horse Tavern in Greenwich Village. Musical geniuses like Bob Dylan and Jim Morrison drank alongside literary minds like Norman Mailer, James Baldwin and Hunter S. Thompson. Jack Kerouac was thrown out on numerous occasions. Dylan Thomas’ portrait hangs over the bar, maybe to remind patrons to drink in moderation. In 1953 Thomas drank 18 whiskies, went home and promptly died 3 days later. 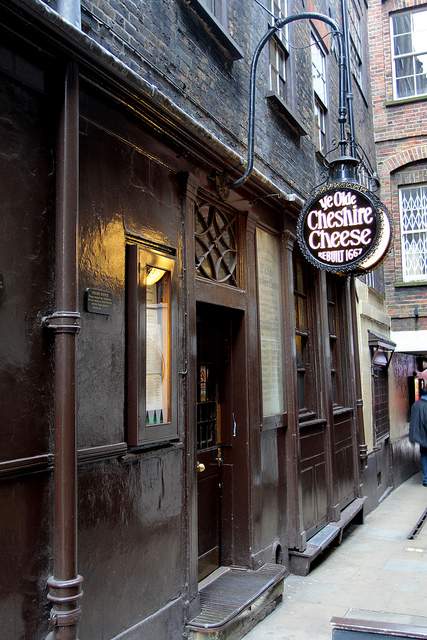 The Cheshire Cheese pub has been around for a really long time. It’s been serving up pints since The Great Fire of 1666. It’s literary history is equally long; Charles Dickens was a frequent visitor and even mentions the pub in A Tale of Two Cities. Over the years Mark Twain, Alfred Tennyson, Arthur Conan Doyle and Dr. Samuel Johnson are all reported to have been regulars. In the twentieth century WB Yeats and Ernest Rhys spear-headed The Rhymers Club which met here often. Inside, the pub is gloomy and dark, befitting it’s Dickensian image. Spaces are cramped and the tall should be prepared to stoop. It’s not without charm though: in the winter a roaring fire keeps patrons warm. Be sure to check out the subterranean vaults which date back to the 13th century. 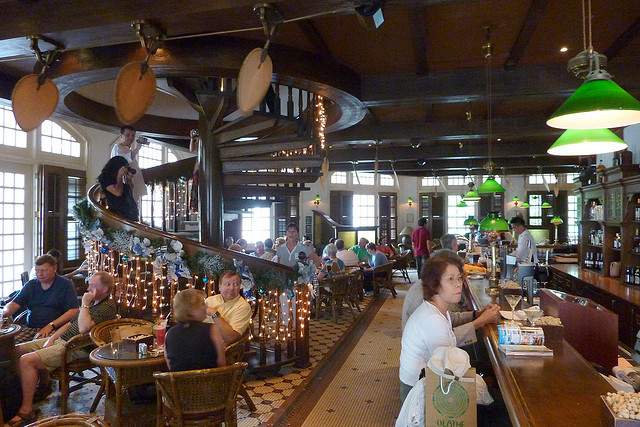 The ritziest and most well-known bar in Singapore, famous for inventing the Singapore Sling, was also a favorite of colonial era writers from the founding. Rudyard Kipling stayed in the hotel when it was first built, in 1887. He enjoyed the bar but thought the rooms were a dump. It must not have been too bad because the celebrities kept coming: Herman Hesse, William Golding and and Joseph Conrad all spent time here.
The bar itself is elegant and old-fashioned. Despite the upscale interior boxes of peanuts top every table- and it’s totally expected to throw the shells on the floor. Somerset Maugham (author of Of Human Bondage) proclaimed that “Raffles stands for all the fables of the exotic east.” 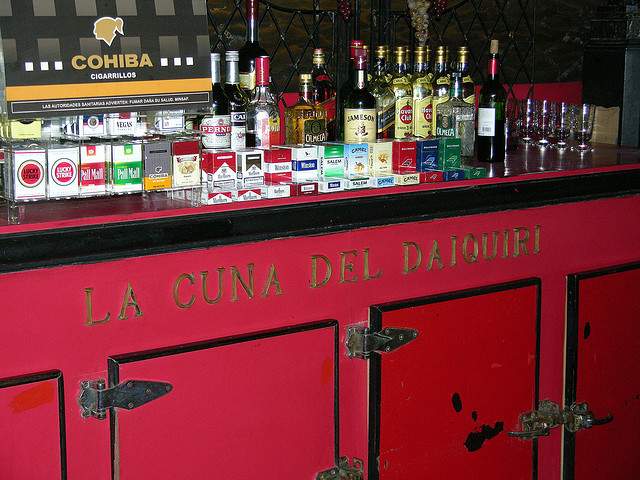 Hemingway has probably given more bars notoriety than any other author- the man loved to both travel and drink. El Floridita, Hemingway’s regular hangout during his time in Cuba, may be the most famous of his haunts. Even when he moved out to the suburbs, Hemingway would still drive into town to drink here. He wasn’t the only fan either: Ezra Pound and Graham Greene were also patrons. At El Floridita you can literally drink with Hemingway- there is a life size bronze figure of him at the bar. Be sure to check out the chummy photo of Hemingway and Castro up on the wall. 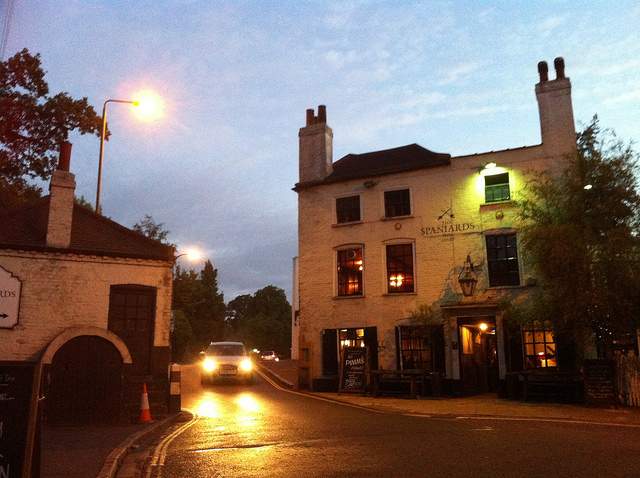 Looking for a little romance? The Spaniards Inn, in northern London right beside Hampstead Heath Park, was a favorite of the Romantic poets – particularly Lord Byron, Pierce Shelley and John Keats. According  to Inn legend, Keats actually wrote Ode to a Nightingale in the garden. The pub itself is probably the oldest on the list – it’s been a well known haunt since 1585. The peculiar shape of the inn and related guardhouse creates a perpetual traffic jam in the area. 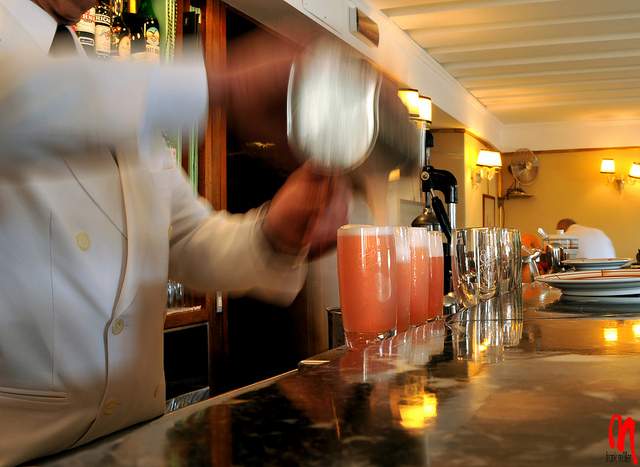 Once a refuge from fascism, Ernest Hemingway was a regular here (of course), but other customers included Truman Capote, Noel Coward and Orson Welles. Even today it is often visited by the cultural elite. Harry’s is known for inventing not only the Bellini (sparkling wine and peach) but beef carpaccio (raw beef). Be warned that the bar is known for being overpriced and touristy; when you dine here, you’re dining solely on history. 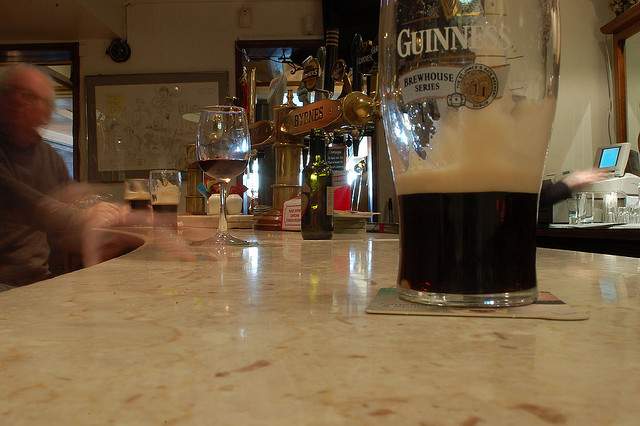 In 1922 the Davy Byrnes pub was immortalized in James Joyce’s masterpiece Ulysses. Now once a year on Bloomsday, the novel’s devoted fans stop by for a cheese sandwich and glass of wine, just like their literary hero Leopold Bloom. James Joyce was a regular here himself, a fan of its excellent pub food and seafood. The bar is bright, modern and curvy, and is still quite popular with locals. 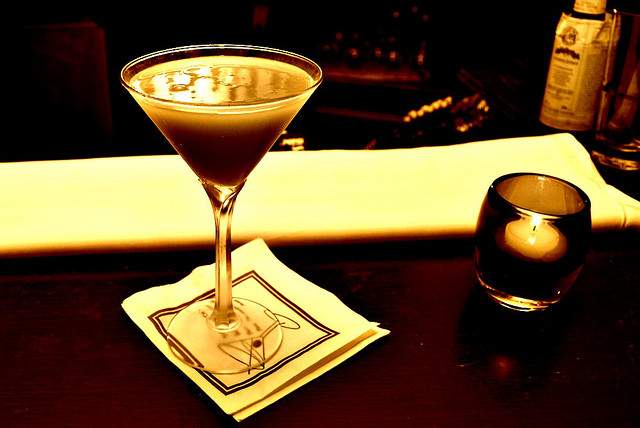 The Algonquin Round Table was another famous literary group, which included playwrights, poets and actors including Dorothy Parker, George S. Kaufman and Harpo Marx. The group lunched daily at the Algonquin Hotel in Midtown Manhattan, and played cards there on Saturday nights. During the 1920′s they were one of New York’s coolest clubs, leading them to be dubbed “The Vicious Circle.” Today the hotel is a subsidiary of the Marriott, but it still maintains some of the glamor and tradition of the old days. The Round Table restaurant still contains the eponymous “round table” and murals of the glamorous former patrons.
Posted by Sylvia Ney at 4:32 PM

Excellent post. I'm one of those people who do like to look up places where writers were known to hang out, and still do.

Lots of info, thanks for sharing. Like the pics too.

Great post! I would love to go to Ye Olde Cheese. I love seeing places that have a tie to anything before the 1800s. Would also love to visit the places Hemingway did in Paris.

Neat list! Maybe a "traveling writer's tour" is in order. :)

Love this! Thanks for sharing, I may have to add some of these places to my bucket list!

This is so cool! Putting all these on my bucket list. :D

Now that's a great list. Makes me wish I were a drinker.

So what you're saying is we need to chose our pubs carefully, because in a few years time they'll be inundated with all our fans. Note taken :-)